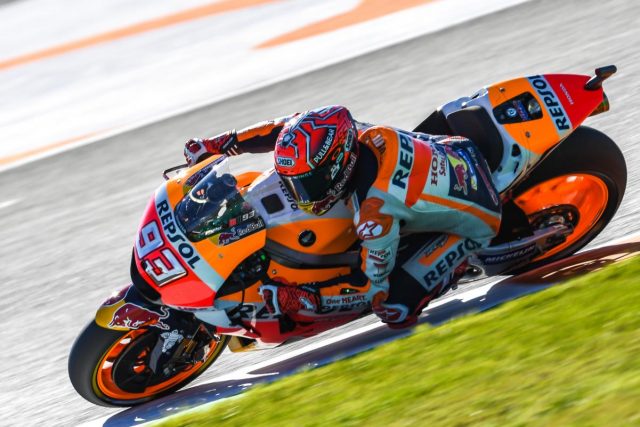 Marc Marquez is a four-time premier class world champion despite a heart-stopping Valencia Grand Prix in which Andrea Dovizioso’s title hopes ended in the gravel.

Dani Pedrosa won a tense race which exploded into life in the final eight laps when his Repsol Honda team-mate Marquez somehow survived a huge elbow-down moment and trip into the gravel trap before both factory Ducatis went down on the following lap.

The start was highly favourable to Marquez, who led into the first corner despite a wheelie off the line as Pedrosa slotted into second position.

Johann Zarco soon passed Andrea Iannone for third as Dovizioso moved up to sixth in the opening corners, just behind team-mate Jorge Lorenzo.

Marquez chose to let Zarco take the lead on Lap 4 after the Frenchman had squeezed past Pedrosa two laps earlier, and the top two settled into a rhythm with Marquez apparently willing to follow.

Meanwhile, Lorenzo and Dovizioso had got by Iannone to run fourth and fifth.

The top five ran unchanged until Lap 20, despite Dovizioso seemingly having more pace than Lorenzo.

Ducati responded by issuing the same coded dashboard message (“Suggesting mapping: Mapping 8”) to the Spaniard as it did in Malaysia on three occasions, plus a pitboard instruction to cede the position to #04.

Marquez was able to go with Zarco with ease and briefly reclaimed first position when the Tech 3 Yamaha rider ran wide on Lap 20, but Zarco was quickly back up the inside.

Around the same time, Lorenzo was issued the fuel mapping message for a fourth time.

Marquez was more pre-meditated at the final corner on Lap 23, but he was in front again for only the length of the straight before sliding off at Turn 1.

He kept the #93 Honda upright on his knee and elbow then somehow rode through the gravel to re-enter the circuit in fifth position, still comfortably in the live championship lead.

DRAMA!!! Marquez runs on at turn one after a MASSSSSSIVE save! 😱

The pressure briefly rose a little more when Lorenzo lost the front of bike #99 at Turn 5 on Lap 25, narrowing Dovizioso’s points deficit by one.

However, it mattered not when Dovizioso himself ran wide three corners later and dropped his Ducati in the gravel.

The Italian re-mounted, but only to ride back to pit lane and record a DNF.

Out in front, Pedrosa outbraked Zarco at the final corner on Lap 26 but carried too much speed to hold on to the move.

He successfully executed the pass at the start of the final lap, denying Zarco a maiden premier class win as #26 took the chequered flag in first position for the second time this year.

Marquez, who had by now run wide again at Turn 1, came home in the final podium position, eight better than the bare minimum he needed to secure a sixth grand prix world championship and fourth at MotoGP level. 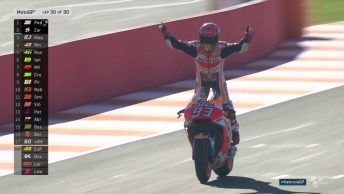 “During the race I was always trying to be calm, trying to control all the situation, but suddenly I say, ‘Okay, now it’s time to push,’ because I felt really good.

“But honestly, in Turn 1 I lost the concentration on the brake point, I braked too late, and you know, Marquez-style until the end!

“I want to congratulate Dovi (and) all the Ducati staff,” he added, “because they did amazing and the fair play was there.”

Rookie Suzuki rider Alex Rins put himself in a position to benefit from the unfolding drama, inheriting a career-best fourth position finish.

Valentino Rossi took fifth in another tough day for the factory Movistar Yamaha squad, with his team-mate Maverick Viñales a distant 12th.

Andrea Iannone (Suzuki) finished sixth, one position ahead of Jack Miller, who ran in the top 10 throughout in his final race for the Marc VDS Honda team.

Eight of the 25 starters failed to finish, with particularly high attrition in the early stages when four riders crashed in the first five laps.

Marquez ultimately finished 37 points clear of Dovizioso in the standings, with Viñales third thanks largely to his stellar start to the season, while Pedrosa pipped Rossi to fourth.

The 2018 MotoGP field will return to the Circuit Ricardo Tormo on Tuesday for a two-day post-season test.