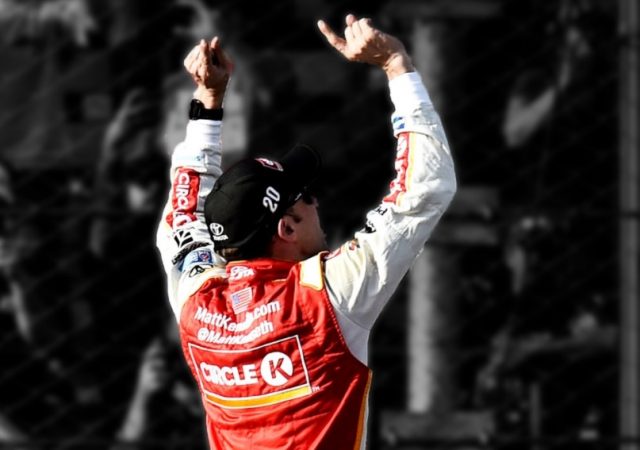 Matt Kenseth may be without a ride anywhere in NASCAR in 2018, but that didn’t stop him from taking the victory at the penultimate round of the Monster Energy NASCAR Cup.

His victory, which denied Chase Elliott a spot in the Championship 4 next week at Homestead-Miami also mean that only Ford and Toyota, not Chevrolet, can win the title.

The drivers fighting for the championship will be Martin Truex Jr., Kyle Busch, Kevin Harvick and Brad Keselowski. Only Truex is yet to win a title and will be the firm favouite after his dominant season in 2017.

Kenseth led 60 of the 312 laps, breaking through for his first win of the year, second victory at the Arizona track and the 39th of his career. The 45-year-old driver got by Elliott with 10 laps left.

Along with Elliott, Denny Hamlin, Ryan Blaney and Jimmie Johnson were eliminated from the NASCAR Playoffs in the cut-off race.

Hamlin’s exit was the most dramatic as his Joe Gibbs Racing No. 11 Toyota crashed into the Turn 3 wall on Lap 275, just a few laps after repeated contact with Elliott.

“We had a fast car all day. … We put ourselves in good position, things just didn’t work out there at the end,” said Hamlin.

The two had differences in the Round of 8 opener two weeks ago at Martinsville Speedway, where Hamlin made contact that sent Elliott spinning from the lead.

That crash opened the championship window for Keselowski, who was 19 points above the cut-off line at the chequered flag.

“It feels a little bit like Christmas,” Keselowski said. “Sometimes you have to have a little luck on your side.”

Johnson was the first to fall from contention, scraping the Turn 3 wall with a right-front tyre down and bringing out the race’s second caution period on Lap 149.