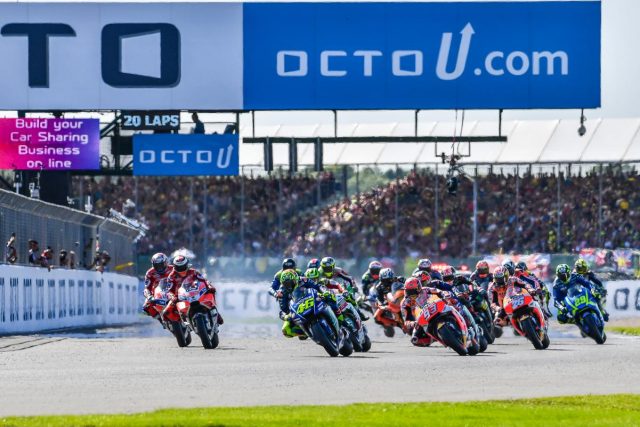 The start of the 2017 British Grand Prix pic: MotoGP

The MotoGP British Grand Prix will be hosted at Silverstone for the next three years.

Silverstone’s current run as host of the British Grand Prix began in 2010, replacing Donington, but it has essentially served as a placeholder for the Circuit of Wales since 2015.

However, the Circuit of Wales has still not come to fruition, with the Welsh government choosing in June to not provide a financial guarantee to build the circuit.

While the 2018 calendar was released with the circuit ‘TBA’ for the British Grand Prix, Silverstone has now been locked in until at least the end of 2020.

Silverstone Managing Director Stuart Pringle hailed the longer-term deal for the circuit, which will host MotoGP on August 24-26 next year.

“A lot of time and money has been invested in recent years to ensure MotoGP fans, teams and riders enjoy what Silverstone has to offer and we are delighted to have secured the contract to 2020,” said Pringle.

“Two-wheel racing is as much a part of Silverstone’s heritage as four-wheel racing and we are looking forward to welcoming the Championship and its fans back to Silverstone next August.”

Dorna Sports CEO Carmelo Ezpeleta said, “Silverstone is an iconic British circuit, so naturally we are pleased to be able to continue racing at this track.

“The United Kingdom is an important market for Dorna and has to remain on the MotoGP calendar.”