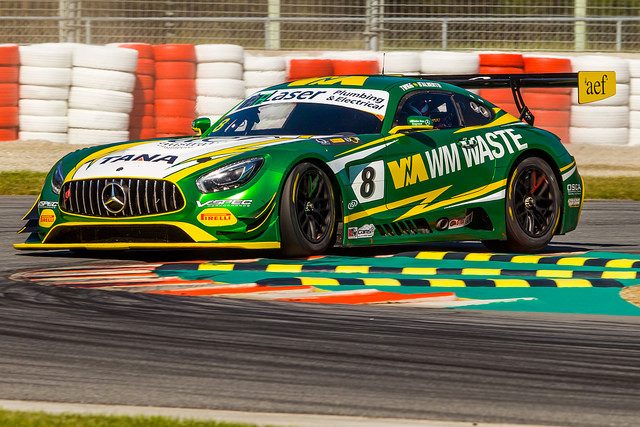 Tony D’Alberto and Max Twigg claimed victory in a dramatic Highlands 501 while the Eggleston Mercedes pair of Peter Hackett and Dominic Storey took out the Australian Endurance Championship title.

The Twigg/D’Alberto Scott Taylor Motorsport Mercedes assumed the top spot in the closing stages when race leader Storey had to pit with suspension issues.

They ultimately crossed the line 13 seconds ahead of the Tony Quinn- and Andrew Waite-driven McLaren, while the podium was rounded out by Adrian Deitz and Cameron McConville in the Zagame Lamborghini.

“We hung in there, the car had great pace over the stint,” said D’Alberto.

“A few other guys had problems, Max did an awesome job in his first stint, really set us up for the win.

“He really put the car at the front, (did) great lap times, so I couldn’t ask for anything more; really happy.”

An eventful conclusion to the race saw previous championship leaders Tim Miles and Jaxon Evans eliminated when the latter hit the wall on the exit of the Bus Stop.

Evans had been chasing then-leader Storey but the impact caused major damage to the left-hand-side of the Audi which saw the wheel come astray.

Justin McMillian and Glen Wood came home in fourth after an underdog drive aboard their Lamborghini, while Roger Lago and David Russell rounded out the top five in the sister entry.

Hackett/Storey took sixth after Eggleston Motorsport managed to resolve the problem on the Mercedes and get Storey back out on track, claiming the championship title by 62 points.

Liam Talbot and John Martin were the first to DNF after the former made contact with Dylan O’Keeffe’s BMW on the opening lap, damaging the steering on the Porsche.

Shane van Gisbergen and ‘Mad Mike’ Whiddett also retired as a result of contact on Lap 24, when the Matt Halliday driven Audi made contact with Whiddett’s McLaren at the penultimate corner, breaking the right-rear upright.

Next out of the race were Fraser Ross and Alvaro Parente in their McLaren, with Parente grinding to a halt on the exit of the Bridge on Lap 77 with clutch issues.

Steven Richards and O’Keeffe’s afternoon also ended abruptly when the Team SRM BMW retired with an electrical issue in the gearbox.

The Highlands 501 sees the conclusion of the Australian Endurance Championship season, with just one more round remaining in the Australian GT Trophy Series at Wakefield Park on November 17-19.