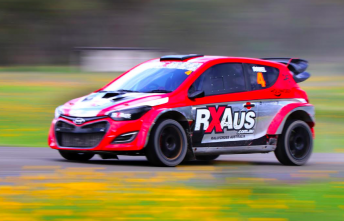 Justin Dowel has won the RXAus.com.au Australian Rallycross Championship title while Will Orders stormed to victory in the final round held at Carnell Raceway.

The former Australian Rally Championship winner secured the crown following a consistent performance over the heat races at the track, located in Stanthorpe, Queensland.

His run, aboard a Hyundai i20, included a narrow 0.0063s victory over title rival Will Orders (Mitsubishi Lancer) in the third heat.

With the championship sealed, he had to play second fiddle to his rival in the main races but still walked away from the season with a 98-point series winning margin.

“It was a good battle with Will. He’s a world class driver and we’ve had some ding-dong battles. Today we didn’t quite have enough for him,” said Justin Dowel.

“All year we’ve been neck-and-neck and I’m already looking forward to next year when hopefully there’ll be another three, four or five ‘Supercars’ (Open class AWD cars) running and it will be even harder to win.

“A lot of people had doubts that the series would continue give Rallycross has had a few starts here, but people gained trust and really enjoyed watching the racing.

“It’s definitely the most entertaining form of motorsport there is.”

Round winner Orders overhauled Troy Dowel for second in the championship in the final round, turning a six-point disadvantage entering the event into a 19-point advantage by the end of the day.

Orders won two heats, the final and Super Final to take the round victory, while Justin Dowel edged out teenage son Troy Dowel for the final steps on the round six podium.

Troy, however, won the 2WD class after a superb performance in the Super Final over class champion, Mike Conway.

Conway started his weekend strongly with wins in all three heats, however a non-finish in the final hurt his grid position for the Super Final, while Dowel was too strong in the six-lap season finale.

The championship is expected to announce an expanded 2018 schedule in due course.