The start/finish straight of the Newcastle street circuit The layout for the Coates Hire Newcastle 500

Dutton visited the 2.6km venue located at the New South Wales city on Thursday to scope out the pit facilities and track layout ahead of the championship decider from November 24-26.

Construction of the new 12-turn circuit, which began in May, is in the final stages of completion in preparation for the maiden Supercars Coates Hire Newcastle 500.

Untested by teams, the track is set to offer an element of the unknown for drivers, featuring a mixture of elevation changes, fast sweeping corners, 90 degree turns, long straights and a tight hairpin.

After a quick assessment of the circuit, Dutton believes the circuit will be a fitting test to decide this year’s title.

“My first impression is that it will be a cool joint for a grand final,” Dutton told Speedcafe.com.

“There was not a lot I could learn from the visit but all the teams have been given a really good information pack which details the corners and elevation changes.

“From walking around the track, 80-95 percent looks to have been resurfaced so it should be pretty grippy. 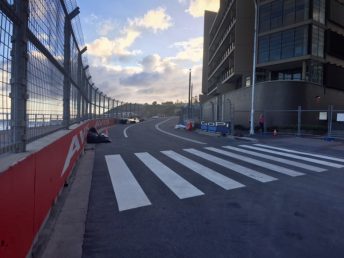 Turn 5 of the Newcastle circuit

“Like a lot of street circuits the 90 degree corners are a long way away from what we are used to on a proper race track.

“There will be a lot of point and squirt, so getting the power down will be crucial, although with the amount of grip it ultimately won’t be terrible to get it down.

“With the event being new I think the hunger to be successful up and down pitlane will pose a new challenge.

“I don’t think there will be any courtesy to the people fighting out the championship. We will all be racing for sheep stations.

“It (the track) will have its own uniqueness which is a challenge we are all looking forward to.” 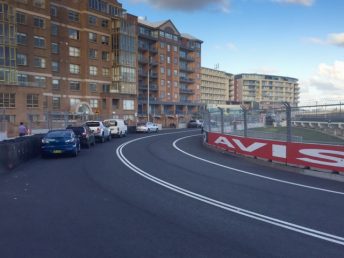 It appears the elevation changes, particularly from Turn 1 climbing up Watt Street to Turn 2, and the subsequent fall as the track winds itself down to the coast, is perhaps its most defining and challenging feature.

According to Dutton early indications of the circuit suggest there will be several overtaking spots aided by the widening of roads completed as part of the construction.

“The elevation change is quite different to most street circuits we race around,” added Dutton.

“Homebush had a little bit here and there but this is completely different.

“With elevation changes there is often not a straight line from the bottom to the top.

“Therefore you will have bumps and the unloading of the car, and different things like that to deal with. 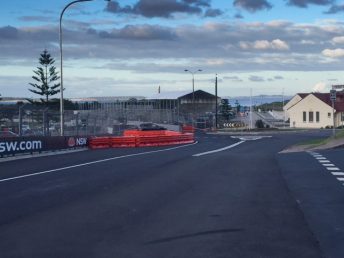 The circuit winds down to the Turn 11 hairpin

“There is a lot less surface changes than you usually find at street circuit which is good.

“But I think with the elevation it will prove that places which appear to be easily flat (out) might not be.

“It appears they (circuit designers) have gone to a lot of effort to make the road as wide as they can wherever they can.

“Speaking to some of the locals, they have dramatically increased some of the width of the roads.

“I think they have tried to make it over two cars width as much as they can in places to encourage racing, but it is tight and there are 90 degree corners, so it will be hard.”

The Coates Hire Newcastle 500 will take place from November 24-26.