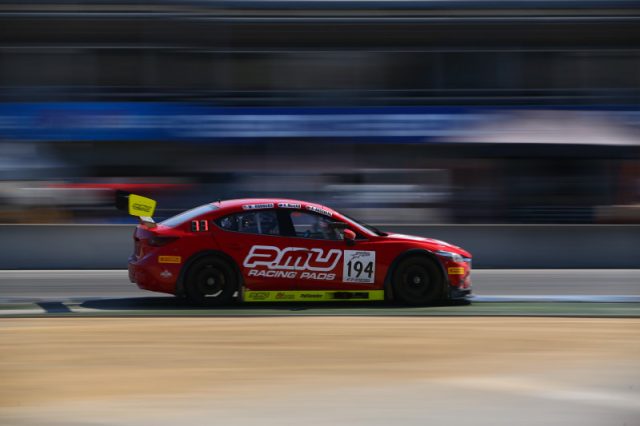 MARC Cars Australia’s North American swing will continue this weekend with two of their Mazda 3-bodied V8s racing in the 24H COTA.

MARC arrives at the Texas circuit off the back of twin top 10 outright finishes in last month’s inaugural California 8 Hours at Laguna Seca, where they finished eight laps ahead of the lead GT4 car.

“We really enjoy the challenge of racing 24-hour events.

“We always race within our team, but to add to that we will be racing against our customer team also, and then some stiff competition from Porsche and Mercedes, so we have packed our A-game for this one

“Our cars are constantly developing so the speed over a lap gradually gets faster each year, but the aim for a 24-hour event is always distance over time.

“So we look more at metrics like laps per hour, or laps per two hours to gauge our performance.

“That’s where the not-so-obvious performance gains, like pit stops, fuel consumption, tyre wear and brake wear come into play. As a team this is how we look to win the race.”

Jake Camilleri, Morgan Haber, Keith Kassulke, and Hadrian Morrall will team up in one car, with Clint Harvey, Brett Niall, Malcolm Niall, and Robert Thomson in the other.

Australia is also represented by Stephen Grove and Danny Stutterd, who will share a Porsche with New Zealander Sam Fillmore run by American team FREEM USA in the 991 class.

The 24H COTA is actually run in two parts separated by an overnight ‘intervention period’ owing to local regulations.

Noise restrictions preclude early-morning running, meaning that at 2300 local time on Saturday the field will go under Safety Car to be led to a compound.

Drivers will exit their vehicles and an hour later crews will push the cars to the starting grid, during which time they are otherwise essentially under parc ferme conditions.

At 0800 on Sunday, drivers will return to their cars to complete the final 10 hours of the race.

Practice and qualifying will be held on Friday local time (Saturday morning AEDT) before the first 14 hours of the race on Saturday (starting Sunday 0200 AEDT) and the remainder on Sunday (starting Monday 0100 AEDT).