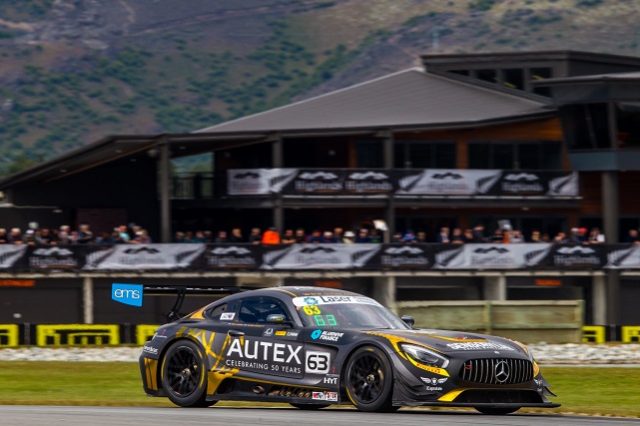 Peter Hackett and Dominic Storey have finished fastest in the opening day’s practice for the Highlands 501.

The Eggleston Motorsport Mercedes-AMG GT3 clocked a 1:31.424s in the second of two 40-minute hit outs at the final round of this year’s Australian Endurance Championship.

“It’s a good start to the weekend,” said Storey.

“(It’s) only practice, but there’s a little more in it, so I’m pretty rapt with that.

“Overall, the car is feeling really good on circuit and it’s doing everything we want it to, so we’ll make some minor changes overnight and hopefully improve a little more for qualifying.”

Championship leaders Tim Miles and Jaxon Evans were fourth quickest in Practice 2 in the Jamec Pem Audi R8, having been fastest in the first session.

Tony Quinn and Andrew Waite rounded out the top five in the second Darrell Lea McLaren.

Steven Richards and Dylan O’Keeffe in the BMW Team SRM BMW M6 GT3 were down in 14th and 13 seconds off the quickest time in Practice 2, after being sidelined with a turbo issue.

Zagame Autosports’ Adrian Deitz and Cameron McConville ended the day inside the top 10, despite a spin from Deitz which left the car beached in the Esses in Practice 2 and triggered a brief red flag.

Track action continues tomorrow with Practice 3 in the morning 0955 (0755 AEDT), before a pair of Qualifying sessions and the Top 10 Shootout later in the day.