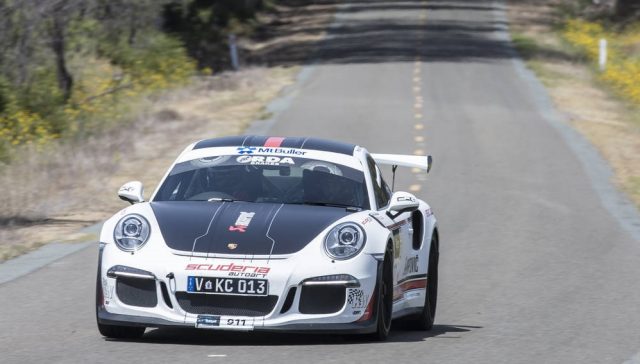 Reigning champions Matt Close and Cameron Reeves have set the pace on the opening day of Targa High Country, based at Mount Buller in north east Victoria.

Driving a 2017 Porsche GT3 RS, the pair won all six of the day’s stages to open up a commanding overall lead of more than a minute from the Angus Kennard and Ian Wheeler in a 2015 Nissan GTR.

After a brilliant drive on the first day, third place is held down by the 2004 BMW M3 CSL of Adam Kaplan and Aleshia Penney, a further 20 seconds behind Kennard.

In fine and warm conditions, the 140 competitors left Mount Buller early on Friday morning, with a lunch break in Euroa.

Matt Close’s performance over the first day will make him hard to catch over the remaining two days of competition.

“It’s been just about the perfect day, and we capped it off by setting the fastest ever time up Mount Buller, so we’re stoked,” Close said.

“Tomorrow actually suits our car better than today, but it only takes a puncture to cost you a minute or more. We had one last year, so we need to drive fast, but clean.

“I’m really looking forward to the street stage in Mansfield tomorrow afternoon. It’s great to give something back to the fans, so we’ll be having a red hot go on that one,” he added.

In third place is another Porsche, a 2016 GT4 driven by John Ireland and Janet Binns. Shepparton’s Alan Roe lies in fourth place, two and a half minutes from the lead.

Angus Kennard’s speed over the first six stages sees him with a 49 second advantage over Josh Hilton in RDA Brakes GT4.

“The stages are probably the bumpiest of any Targa stages we do for the year, but we have new suspension on the car which made a big difference to the handling.

“Tomorrow is faster and suits our car a lot more, so I’m looking forward to it.”

For outright third placed Adam Kaplan, it was just about the perfect day as he also set up a lead of over a minute in the Duttons Garage Early Modern class, while in the Mansfield Shire GT Sports Trophy, Alan Gluyas (Renault Megane) is just three seconds clear of Mark Meletopoulo in a Lotus Exige S.

As always, the Classic competitors have been a hit with Targa fans. The early pace setter in Shannons Classic has been Queenslander Lindsay Stone in a Mazda RX7, well clear of Richard Woodward’s 1969 Holden Monaro GTS.

A small field in the Shannons Classic GT competition is led by the Holden Torana of Michael Bray, more than seven minutes clear of his nearest rival.

The event also includes the speed limited Mt Buller TSD Trophy competition, in which Peter and Tristan Taylor hold the lead in a 2013 Lotus. They are just two points ahead of the 2016 Lotus of Brian Pereira and Stevie-Lee Davis.

Day two of Targa High Country will take crews from Mount Buller to Whitfield via three stages. The return run finishes in Mansfield, with the popular street stage around the town – this year extended to over four kilometres in length.

Targafest in Mansfield’s main street concludes the action, where spectators can get up close to the cars and drivers, and take in all that Targa High Country has to offer.