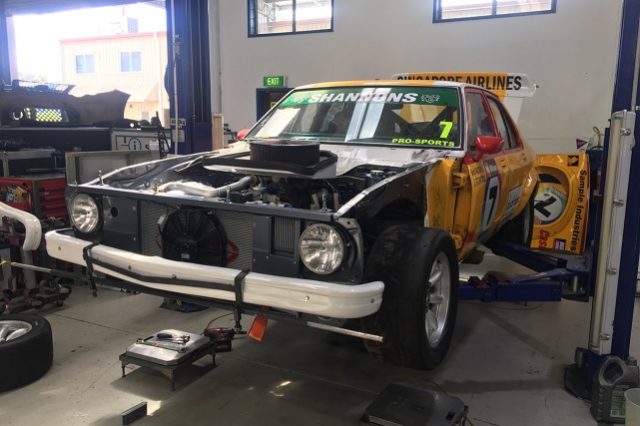 The two Matt Stone Racing Toranas which sustained damage across the last two rounds of Touring Car Masters are set to return to the race track for testing tomorrow.

Jason Gomersall sat out the most recent round at Bathurst after shunting his Bigmate A9X at the end of the back straight during Race 2 at Sandown.

Bob Wisely pranged the sister Bob Morris tribute A9X at Mount Panorama when he got caught out by dirty air from Tony Karanfilovski’s car on the run to The Chase in Race 2.

Both cars will be back in action at Queensland Raceway tomorrow ahead of their trip down to Newcastle for the final round of the series a week later.

“(It’s) All good,” Wisely told Speedcafe.com when asked about the state of his car.

“We’re actually testing on Friday at Queensland Raceway, both myself and Jason Gomersall, so all on-track for Newcastle.”

While Wisely’s car, like Gomersall’s, missed the rest of the relevant race weekend, Wisely says that the decision to sideline his car was more precautionary than of necessity.

“It was mainly cosmetic on mine but Jason’s was a little bit more,” noted the Queenslander.

“He had some sub-frame damage, where mine was just in the front of the sub-frame, and being fibreglass panels made it look worse than it was.

“We’ve had both the engines checked over at KRE and everything was good so we’re ready to do some testing on Friday.

“We did bend the swaybar mount, which is on the front of the chassis on those, and it also banged the front of the dry sump pump, so we just weren’t prepared to take the risk that it had done any internal damage.”

Gomersall will return to the ProMasters class in his Holden Dealer Team-look Torana on the bank of the Hunter River, having enjoyed strong spells before each of his major accidents at Winton and Sandown.

Wisely still sits third in the ProSports class, though he has lost ground to Darren Beale and Leo Tobin.

John Bowe holds a slender five-point lead over Steven Johnson in both ProMasters and outright competition ahead of the final round at the Coates Hire Newcastle 500 on November 24-26.