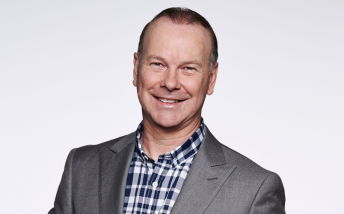 Popular pundit Mark Larkham is in the frame to return to the main Supercars telecasts next year as a pit lane reporter and technical expert.

Speedcafe.com has learned that Larkham has been targeted to replace Greg Rust, who will leave the Supercars TV team at the end of the season.

‘Larko’ has been Ten’s expert analyst since the Supercars broadcast rights switched from Seven to the split deal with Fox Sports and Ten in 2015.

He also features on the free-to-air network’s RPM motorsport show with his entertaining whiteboard technical segments.

While Supercars race coverage is simulcast on Fox Sports and Ten, both have their own presentation teams to augment the common commentary.

In the reshuffle that followed the end of Seven’s deal, Larkham ended up joining Ten alongside presenter Matt White at the events, as well as starring on RPM.

According to multiple sources, Larkham is now being courted to rejoin the Supercars TV commentary line-up in the pit lane and as a regular panellist.

While he is the leading candidate to take over from Rust, it is understood others are being considered as well.

When contacted by Speedcafe.com, the former V8 driver and team owner would neither confirm nor deny that he was in talks to move from Ten to the Supercars commentary team next year.

He also refused to clarify his contractual status with Ten, which is in the throes of a takeover by American broadcasting giant CBS.

Despite dropping F1 amid its financial crisis, Ten will continue as Supercars’ FTA broadcaster, showing selected major events live and highlights of the rest, for the duration of the existing agreement through 2020.

However, without the FTA rights to F1, apart from the Australian Grand Prix, the future of RPM is unclear.

Several sources have confirmed that there have been discussions about luring Larko back to the Supercars Media-produced telecasts, reprising the pit lane and technical analysis roles he had when the sport was shown on Seven.

It was on the Seven coverage that his famous ‘Mr Squiggle’ freehand whiteboard sketches explaining complex technical and strategic subjects in simple terms were introduced.

They established him as a fan favourite and remain a highlight of RPM, along with his behind-the-scenes reports.

Larkham is regarded by senior Supercars TV production staff and Fox Sports insiders as the ideal replacement for Rust, who announced at the end of September that he would be leaving at the end of the season.

Other sources have indicated that while he is the leading candidate, Fox Sports Supercars news reporter and MotoGP host Chris Stubbs, and Supercars on-course commentator Chad Neylon are among others being considered.

It is expected that whoever takes over from Rust will join Greg Murphy and Riana Crehan in the pit lane, although with a replacement for outgoing Supercars Media boss Simon Fordham also coming on board, sweeping changes to the presentation of the telecasts next year haven’t been ruled out.