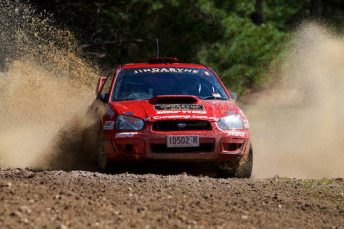 CAMS has announced dates of four events for next year’s Australian Rally Championship ahead of a full calendar reveal at Kennards Hire Rally Australia.

The Eureka Rally in Ballarat will again serve as Round 1, but has been moved forward a fortnight to a March 3-4 slot.

Similarly, Round 2 takes place at Western Australia’s Forest Rally, but has shifted a week later to the last weekend of April.

There will again be a mid-year round which coincides with the Asia Pacific Rally Championship, which will visit Australia next year on June 1-3.

While the corresponding round this year was the National Capital Rally, a 2018 venue has not yet been confirmed.

The season will again come to a climax with Kennards Hire Rally Australia, the final round of the World Rally Championship, on November 15-18.

CAMS General Manager of Motorsport Michael Smith said he was pleased with how the 2018 calendar was coming together.

“The competition in the CAMS Australian Rally Championship over the last couple of years has been fantastic,” said Smith.

“Recent championships have come down to the wire and the battles we have seen between the likes of Molly Taylor, Harry Bates, Nathan Quinn, Eli Evans, just to name a few, have been enthralling.

“CAMS is working hard to put in place the very best rally events in Australia to help this close competition continue to thrive and grow.”

While the confirmed events represent a similar look and feel to 2017, organisers of this year’s other rally, Rally SA, announced in October that they would not be continuing in 2018.

The rest of the calendar will be revealed at Rally Australia, which starts in just over a week’s time (November 16-19).

See below for both calendars

Further event(s) to be announced