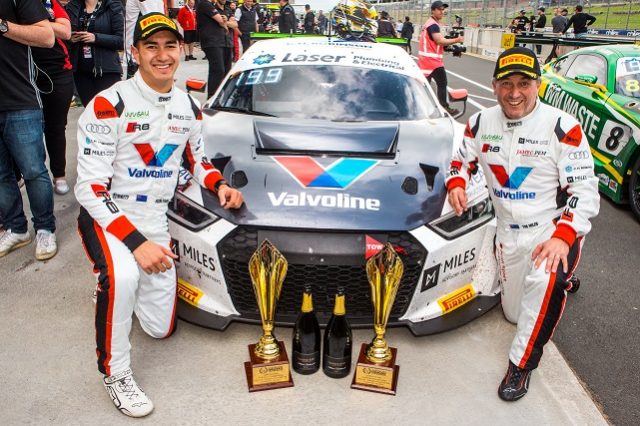 Jaxon Evans and Tim Miles after the Hampton Downs 500

Jamec Pem Racing is eyeing off a historic title double as Jaxon Evans and Tim Miles take the Australian Endurance Championship lead into this weekend’s finale at Highlands Motorsport Park.

Evans/Miles hold a 76-point advantage over last start winners Peter Hackett and Dominic Storey, meaning that a podium finish would be enough to clinch the championship.

The crown would add to that which Geoff Emery won with Valvoline Jamec Pem in this year’s Australian GT Championship, when he overhauled previous points leader Liam Talbot in the final round of the season at Sandown.

The achievement would make the team the first to win multiple Australian GT titles in a season, but Miles insists that the focus is on the race itself rather than playing a championship game.

“I think as soon as you go to a race meeting and think ‘oh, we need to come third’, you’ll come fourth, so we’d rather go there with a focus on trying to win and see what comes out of it,” he said.

Evans agreed with his co-driver’s assessment of the situation.

“We’re certainly in the box seat,” he admitted.

“We came to Hampton Downs treating it like the first of two rounds.

“Towards the end of the weekend we were thinking of the championship and just trying to keep a close eye on it, but at the same time you don’t want to drive around conservatively, you seem to make a few more mistakes when you’re not pushing to the limit.

“We’re racing drivers, we always want to win, so we always go out and give 100 percent, and Highlands will be no exception.”

They placed runners-up in the Hampton Downs 500 just under a fortnight ago despite their Audi R8 having to be rebuild by Audi Sport Customer Racing Australia the night before.

Miles had aquaplaned off the track at the end of the back straight during qualifying, sustaining heavy front-end damage.

The Highlands 501 weekend begins with two practice sessions this Friday (November 10), with the race itself on Sunday.