Inaugural RXAus AWD title to be decided this weekend

Inaugural RXAus AWD title to be decided this weekend 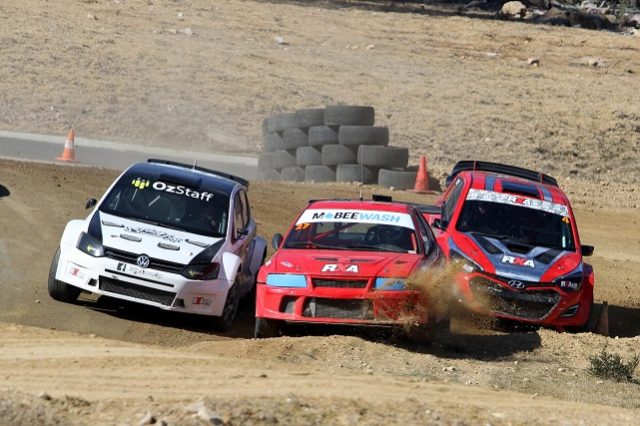 Troy Dowel, Will Orders, and Justin Dowel (L-R) during Round 5 at Marulan

The RXAus Australian Rallycross Championship All-Wheel-Drive class title will go down to the final round of the season this weekend at Carnell Park Raceway in southern Queensland.

Justin Dowel (Hyundai i30) leads AWD by a healthy 102-point margin though both Troy Dowel (VW Polo) and Will Orders (Mitsubishi Lancer) are mathematical chances.

The latter two, however, are split by only eight points in Troy Dowel’s favour, and the teenager will be riding a wave of confidence heading into the finale.

The 16-year-old passed both Orders and father Justin Dowel in the AWD Final last time out at Marulan to take an impressive victory.

Troy Dowel has also been racing in the Finnish RX Academy this year, and recently announced that he will make his full rally debut at Rally Australia less than a week after the RXAus round.

Meanwhile, Cahal Carey will step up to the AWD class from Excel Cup in a new Mitsubishi Lancer ahead of a full campaign next year.

In 2WD, Mike Conway has already wrapped up the title in his Ford Escort Mk 2 but will still face stiff competition from Troy Dowel, who has raced in two classes all season, and Scott Anderson (VW Polo).

Aaron and Darren Windus, however, will be absent due to a family wedding.

The inaugural RXAus Australian Rallycross Championship draws to a close with Round 6 at Carnell Park Raceway in Stanthorpe this Saturday November 11.