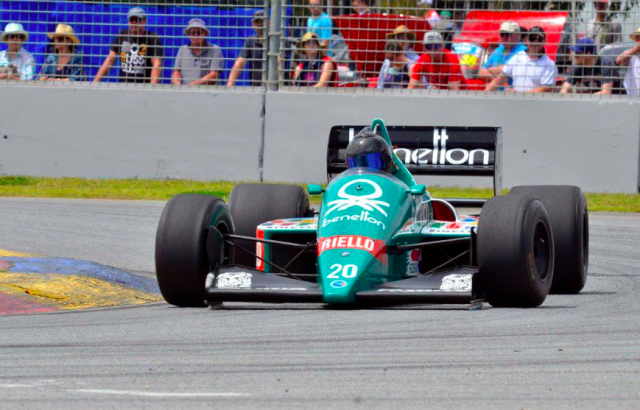 Organisers will welcome nine F1 cars spanning four decades of competition to the event at the Victoria Park sprint circuit at Adelaide from December 9-10.

Fan favourite Lowndes and Sandown 500 winner Cameron Waters are set to share an ex-Gerhard Berger Benetton BMW B186, which raced during the 1986 season.

The car recently featured in the event’s ‘Race to The City’ promotional video when driven by Waters.

Lowndes and Waters are set to jump behind the wheel of the machine for demonstration runs at the festival, which celebrates all forms of motorsport.

The former, who raced in Formula 3000 in 1997, has previously driven F1 machinery when he lapped Mount Panorama in Jenson Button’s McLaren in 2011.

Meanwhile, Brad Jones Racing’s Slade will jump behind the wheel of a 1994 ex-Christian Fittipaldi Footwork FA15 that also starred in the festival promotional film. 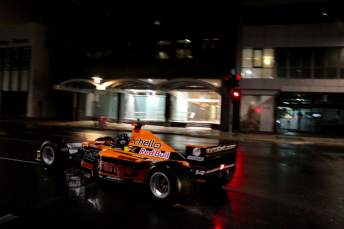 Dunlop Super2 Series driver Josh Kean is set to drive an Arrows A21 driven by Jos Verstappen in 2000.

Pete Faulkner will steer his ex-Alan Jones Williams FW07-B in Adelaide this December; the same model car that carried Jones to the 1980 World Championship.

The iconic Williams not only delivered Jones the world title, but the first championship for the famous British team.

The F1 contingent will be boosted by a Larrousse Lola LC88, raced by Philippe Alliot in the 1988 Formula 1 season, owned by local driver Brenton Griguol.

De Cesaris qualified ninth in Adelaide in the car in 1989, but spun off twice at the same corner in appalling wet conditions, completing just 12 laps of the race.

Several cars will turn back the clock to before the Adelaide era commenced, with cars from the 1970s and early 1980s also set to feature.

Richard Lihou will drive a 1979 Candy Tyrrell 009, powered by a Ford Cosworth V8.

This particular car was raced in the 1979 season by Derek Daly, and was a competitive car that year – scoring four podium finishes in the hands of Didier Pironi and Jean-Pierre Jarier.

Finally, Gerry Duyvestyn will drive the oldest Grand Prix car entered, a 1970 March 701 once raced by the great Mario Andretti.

The 701 was a winner in the hands of Jackie Stewart in the 1970 season and was used by the March factory team, Tyrrell and several other privateer runners that year and in 1971.

Andretti raced the car in several races in STP colours, including a third-placed finish at the Spanish Grand Prix early in that season.

IndyCar will also be represented with a 1986 March 86C ‘Skoal Bandit’ IndyCar set to conduct a demonstration.

The 86C was one of the dominant chassis’ of its time and in Bobby Rahal’s hands won the PPG CART World Series that year.