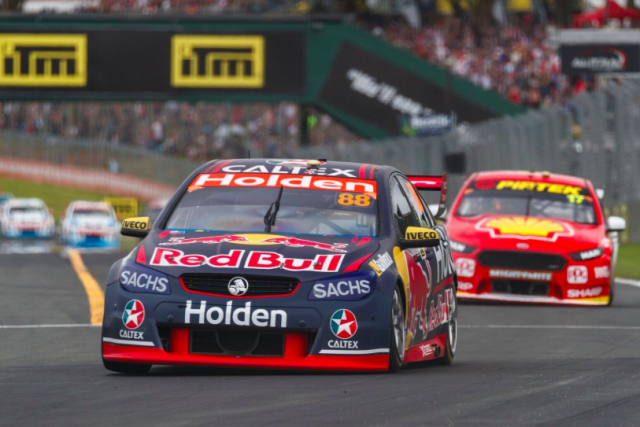 Jamie Whincup believes team-mate Shane van Gisbergen will be on hand to assist his bid to claim a seventh Supercars title at the Coates Hire Newcastle 500.

The Red Bull Holden Racing Team driver will head into the season finale with a slender 30 point advantage over Shell V-Power Racing’s Scott McLaughlin after winning Race 24 at the ITM Auckland Super Sprint.

Pole-sitter Whincup held off McLaughlin in a tense race at Pukekohe to score only his third race win of the season.

While five drivers remain mathematically in contention for the championship, Whincup and McLaughlin are the favourites to do battle for the crown at the newly constructed Newcastle street circuit from November 24-26.

After van Gisbergen ultimately ended his chances following a bizarre pitlane crash on Sunday, the reigning champion is now likely help Whincup’s cause in Newcastle, where there will be 300 points on the table.

With the drivers’ and teams’ titles to play for Whincup expects both Triple Eight and DJR Team Penske to use their drivers to influence the title fight if required.

“I’ve no doubt SVG will try to help me out, nothing untoward, that never happens, but he will certainly help me out and I’m sure Fabs will be doing the same thing for Scotty,” said Whincup.

“Whereas when it was in the same team (like last season) then we’d just battle it out. But it’s not going to be a two-horse race.

“All year they are team-mates and work together,” Dutton told Speedcafe.com.

“There are no team orders at Triple Eight and I think that is quite evident as we saw with Shane winning (Race 23) on Saturday.

“We didn’t try to interrupt that. We need maximum points for the teams’ championship as there are still two boxes to tick.

“What he (Shane) can do to help is be in front of them (the Shell Fords) by racing hard and scoring as many points as possible.

“There will be no funny business.”

Having played second fiddle in the championship race for much of the season, Whincup says his appetite for another crown is as strong as ever.

“I’m as hungry as I’ve ever been. It’ll mean the world to me so we’ll make sure we go there (Newcastle) well prepared and do the best job we can,” he added.

His victory on Sunday was made all the more emotional as the result secured the Jason Richards Memorial Trophy, named in honour of the late Jason Richards, a former team-mate of Whincup’s, who succumbed to a rare form of cancer in 2011.

“It’s been a bit of a drought this year, without doubt,” he said.

“It was a special moment, it’s one of the biggest accolades of the year.

“To get through those hard 70 laps and then see JR’s parents (on the podium).

“Through it we were good mates, we got up to no good together for a couple of years.”

The win also arrived after Whincup felt under the weather throughout qualifying and the race.

“I was just aching, aching after qualifying,” he added.

“I think I’ve nutted it out. I ate a sandwich at about 1 o’clock and I think it was made at about 11:30 and had sat in a warm tent, so I reckon that’s the culprit.

“But I’m glad I got through without having to make an unscheduled pitstop.”