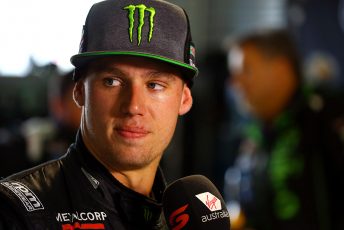 The three Prodrive Fords came together when Waters attempted to pass Winterbottom on the inside at Turn 8.

As a result, Winterbottom was pushed into Mostert who was then pitched into a spin while occupying third position.

Waters managed to jump to third where he remained at the chequered flag as Mostert and Winterbottom dropped to the back of the field.

Mostert produced a stunning fightback drive from 23rd to seventh to keep his title hopes alive as Winterbottom came home in 19th after incurring a drive-through penalty.

After a post-race investigation it was deemed that neither driver was wholly or predominately to blame for the clash.

Waters apologised to his team-mates after the race but felt the move on when speaking before the steward’s decision in the press conference.

“It’s good to get on the podium for the team, but obviously there’s a bit of a sour note to it with the Turn 8 incident,” said Waters.

“For me I thought the move was on, I got up to his door and through the brake zone he pushed me to the inside kerb.

“I thought it was all ok and then obviously Chaz was pretty committed to the corner and it was just a big sandwich.

“I went and apologised to him… Chaz is fine, he gets it, and Mark is a little upset but they’ll be right, they’ll get over it.”

Winterbottom, who had qualified fourth for the race, was clearly disappointed by the friendly fire incident.

“There’s not much to say,” said Winterbottom.

“Frankly our race was ruined by one of our own, so that’s quite disappointing.

“Cam thought the move was on, but this is the end result and it’s tough to deal with. The car was quick, the team prepared it well, so it goes down as a wasted opportunity.

“Not the way anyone wanted to end the weekend.”

“The car was really, really fast in the race, but we just got cannonballed on the first lap and ended up turned around, facing the wrong way, back to the end of all the cars, and somehow got back to seventh,” said Mostert.

“That just shows the speed of the car today. But it’s real disappointing for the boys, because today we had a car that should definitely have been on the podium at the least.”

“They (the drivers) are all pretty upset by the situation and there is no easy way to deal with these things,” O’Toole told Speedcafe.com.

“I will get the drivers opinion first but hopefully we don’t (have to employ new procedures) as long as everyone is respectful of each other.

“I think the investigation and the outcome is right,” he continued.

“From the television footage I thought Cam might be in trouble but looking at the inside (onboard) I can see how both parties were involved.”