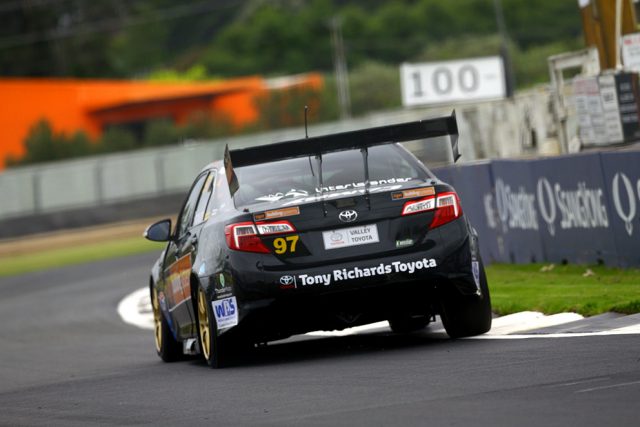 In dry weather, Nick Ross (#007 Concept Motorsports Altima) led the field away at the rolling start for Race 2 and held the place to an early Safety Car for debris.

However, a fly-by-wire throttle problem saw him pull over and cede the lead to Bargwanna (#97 Richards Team Motorsport Camry), which the two-time NZ V8s champion would not give up.

Heimgartner (#71 Richards Team Motorsport Camry) finished second and Ross at least made the finish two laps down, despite having to restart his car several times.

However, the race went under Safety Car almost as soon as the second group started when Brad Lathrope stalled the #73 Dayle ITM Falcon and was shunted by Lance Hughes (#84 Hamilton Motorsports Commodore).

Both drivers were unhurt and the race restarted on Lap 7, but lasted less than two more laps under green flag before another Safety Car when Alan McCarrison’s Class 2 Falcon had a huge let-go and dumped oil at Turn 1.

The race was ultimately red-flagged with Heimgartner the winner from Ross, Herbert, and Bargwanna, as the former two had made their moves just prior to the yellows being unfurled.

Round 2 takes place at Taupo on December 1-3. Proctor won from Michael Collins and Andy Higgins, though the story of the race was a heavy crash for Ken Smith and Codie Banks.

The crash saw the race red flagged, before Proctor took the lead from Collins shortly after the restart, to win the shortened six-lap encounter.

A tight battle between Proctor and Collins then highlighted what was otherwise a processional final race of the weekend, the duo heading Grant Martin by 26.9s after 14 laps of racing. A commanding performance from Tom Alexander netted him another Toyota 86 race win.

Alexander took the lead on the opening race with Reid Harker moving into second beyond Jack Milligan on lap 6.

Milligan proved the aggressor throughout, pushing Michael Scott off the road mid-race before being turned around on the final lap to finish eighth.

Third went to Adam, while Cameron Hill failed to make the flag after being punted at Turn 3 on the fourth lap by Bramwell King.

The second Australian in the field, Dylan Gulson, ended the race ninth.

Nick Chester hung on to win the handicapped final GTRNZ race of the weekend from John DeVeth.

Chester took the lead on Lap 9 before DeVeth moved into second and closed the gap to less than a second at the chequered flag.

Rounding out the podium was Tim Edgell, who had run second for a time before falling behind DeVeth in the final standings.

Greg Cuttance had started from pole, and led for the first three laps with Nick Archibald and Jayden Mason also having spells at the front.

The handicap start race which started Sunday’s proceedings for Central Muscle Cars was won by Shane Johnson, who took the lead with three laps to run in the 10 lap race.

In second was Clarke Hopkins who passed Rick van Swet on the final lap to wrap up the podium.

The final race of the weekend went to Greg Holden, who hung at the front of the pack as the handicap race again built to a crescendo.

Less than a second behind was Tony Barrow with Lance Midgley third ahead of the fast-charging Shane Wigston, who ran out of laps in the rapid 1973 HQ Holden.

The final SsangYong Actyon Utes race of the weekend belonged to Peter Bennett, who led from lights-to-flag in the final 14-lap event.

He was pushed hard by Rowan Shepherd, who moved into second after passing Christina Orr-West on the third lap.

Shepherd and Bennett were split by less than a second for much of the race, though Shepherd never able to mount a serious challenge for the lead.