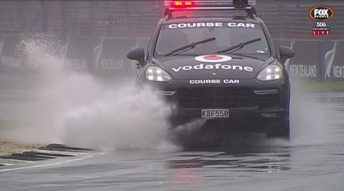 The 20 minute session was initially delayed by 18 minutes due to excessive standing water on the 2.91km Pukekohe Park Raceway following prolonged heavy rain this morning.

It was eventually abandoned almost an hour after its original scheduled start with the grid determined by combined practice times set on Friday.

Officials said the newly resurfaced back straight between Turns 4 and 5 was the reason for the stoppage as several cars aquaplaned in a straight-line.

The session ran for just four minutes with only 12 cars setting times.

Shane van Gisbergen set the pace although the Kiwi and several others endured wild moments.

“The back straight is too new on the surface and it’s just so shiny and slippery,” said van Gisbergen, who set the fastest time before the red flag.

“I didn’t even get full throttle that lap … it was just stupid.”

The feeling was echoed by most of the pit lane with James Courtney declaring the surface like ‘ice’ while visibility was a major concern.

“Second gear and the thing’s aquaplaning and out of control. It’s pretty hairy.

“I think there was a car going slow, I think it was Shane,  and I didn’t even see it until the last second, nearly cleaned him up.

“It’s just that back section, you can’t see. You’re lucky to see the bonnet and the things aquaplaning, so it’s a bit hairy through that part. But we’re all big boys, we’ll press on.”

Teams have limited stock of wet tyres for the weekend with four sets in total for use at Pukekohe.