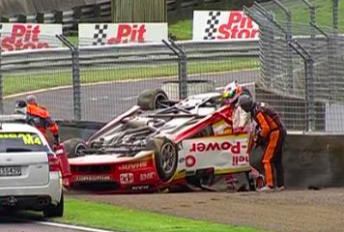 Fabian Coulthard on his roof in Race 23 pic: Fox Sports

Shane van Gisbergen triumphed in an eventful Race 23 that saw title contender Fabian Coulthard end the race on his roof after a multi-car incident at the ITM Auckland Super Sprint.

The Triple Eight driver drove a faultless race from sixth on the grid to take the win having held his nerve after two late Safety Car periods, the last involving a dramatic crash for Coulthard.

Van Gisbergen found himself third in the early stages before emerging in the lead after the second round of pit stops.

The New Zealander scored a popular home round victory after 66 laps from Prodrive’s Mark Winterbottom, who shadowed van Gisbergen’s strategy.

Scott McLaughlin (Shell V-Power Racing) managed to come home in third despite smoke coming from his Shell Ford in the closing stages, while early leader Jamie Whincup was fourth.

However, the race delivered a championship hammer blow for Coulthard as contact with Erebus Motorsport’s David Reynolds pitched the pair into the Turn 10 barriers on lap 57.

The incident was initially triggered by Prodrive’s Chaz Mostert, who tried to redress a position after pushing Reynolds wide at Turn 8 while squabbling over fifth.

At the time Coulthard, who was sitting behind the pair, tried to jump ahead of the slowing Mostert before contact saw him upside down in the barriers.

The retirement has seen Coulthard, who was climbed from the wreckage, drop to third in the standings, while Whincup holds an 18 point lead over McLaughlin with Van Gisbergen fourth just 159 behind.

Mostert copped a drive-through penalty for the driving infringement which set off the incident, dropping him to 23rd position and fifth in the championship.

At the start, Whincup leapt into the lead but it was team-mate van Gisbergen who enjoyed the best getaway to claim third from sixth after a dive on Winterbottom at the first corner.

Despite the damp and slippery track conditions the field completed the opening laps unscathed.

The top three of Whincup, Cameron Waters and van Gisbergen soon broke away from Winterbottom in fourth, while McLaughlin dropped a spot to fifth.

Fellow title contenders Mostert and Coulthard both lost two positions on the start as they slid to seventh and ninth.

It wasn’t long until the first round of pit stops began as teams looked to complete the prescribed 120 litre fuel drop.

Van Gisbergen was the first of the leaders to pit on lap 10 which triggered a flurry of stops.

Whincup retained the lead once the field had taken service for the first time but soon faced a challenge from a charging McLaughlin, who took on slightly less fuel, to emerge in second.

Van Gisbergen held third ahead of the Prodrive Ford trio of Winterbottom, Waters and Mostert.

At the front, McLaughlin soon latched onto the rear wing of Whincup and managed to get alongside on the run through Turn 10.

McLaughlin was forced onto the grass after slight contact from Whincup but the former held a slide and continued to shadow the leader until the race was neutralised lap 32.

The stoppage was caused by Mobil 1 HSV Racing’s James Courtney, who found himself buried in the barriers at Turn 4.

The Safety Car prompted the second round of stops with Whincup and McLaughlin pitting immediately.

Whincup just sneaked out ahead of the Ford but the pair were caught behind the Safety Car which allowed van Gisbergen to take the lead from Winterbottom following their respective stops.

The Whincup/McLaughlin battle continued after the restart as the latter finally found a way by Whincup at Turn 8 to move into third spot.

Meanwhile, Winterbottom applied pressure on van Gisbergen for the lead before they were joined in the fight by McLaughlin.

Dark clouds had threatened through the race before delivering sprinkles of rain with 20 laps remaining.

Van Gisbergen made a strong restart to gap Winterbottom but it was short-lived as the Safety Car was deployed again for multi-car incident involving Mostert, Reynolds and Coulthard.

Once the action resumed van Gisbergen took the win from Winterbottom, McLaughlin and Whincup.

The top 10 was rounded out by Craig Lowndes, Waters, who suffered an off at Turn 4 at half distance, and Lee Holdsworth (Preston Hire Racing).