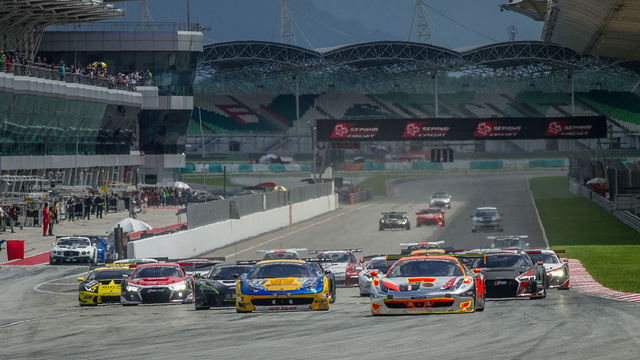 This year’s edition of the Sepang 12 Hours has been cancelled after failing to attract enough entries.

Taken over by SRO ahead of the 2015 event, less than 20 entries were received for the race, which organisers blamed on poor attendance from local spectators for the event which was scheduled for December 7-10.

Organisers also cited among factors in the poor entry list was the decision to switch next year’s Intercontinental GT Challenge from Sepang to the Suzuka 10 Hours, which resulted in a reduced number of Japanese entries.

“Obviously we never want to cancel an event, and SRO certainly doesn’t make a habit of it, but we feel this is the only realistic option available to us less than six weeks before the race is due to take place.

“SRO rightly considers an endurance event featuring less than 18 cars unviable. It’s also important to retain the Sepang 12 Hours’ spectacle, and – given the present situation – I don’t think that would have been possible in 2017.”

Speaking with Speedcafe last month, Sepang Circuit CEO Razlan Razali admitted he had reservations over the event, and its proposed place as part of the Asia Pacific 36 for 2018/19.

“My only concern again is the kind of numbers of spectators that we can attract. If everything is good on track, but it fails to attract or it fails to get bums on seats, then generally it doesn’t work,” said Razali.

“The 12 Hours race that we have with the SRO we have great participation from teams from all over the world to come, but it’s very hard to pull the crowd.

“The culture of endurance here is still very difficult and that relates to the culture of motor sports as a whole.

“People will not drive, or come and watch, this kind of races unless it’s really interesting, and that is my worry. To be able to attract people to come and at least fill up the front side of the grand stand.”

The Sepang 12 Hours was scheduled to be the final round of the 2017 Intercontinental GT Challenge, which has therefore been won by Audi and Markus Winkelhock.