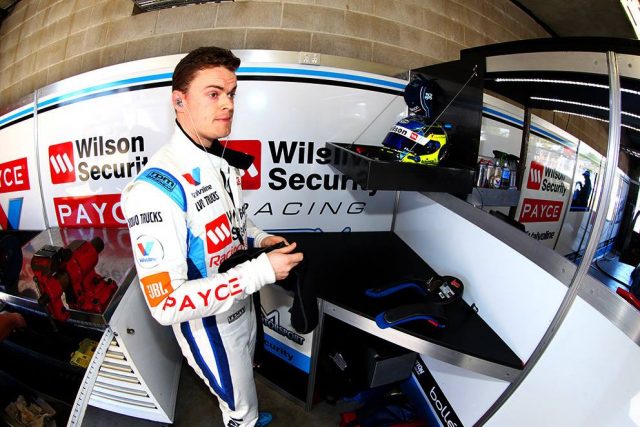 James Moffat is searching for a Supercars enduro drive for next season after confirming he will lose his full-time seat at Garry Rogers Motorsport at the end of the year.

The 33-year-old is facing an uncertain future in the sport with GRM tipped to promote young gun James Golding to drive the #34 Commodore in 2018.

Moffat had declared that he was on the market for full-time drives in September but admits it is now ‘very unlikely’ he will be on the Supercars grid at the Adelaide 500 in March.

“I think being full-time is very unlikely and on the one hand that is disappointing, but on the other hand it might open up some other opportunities that in the past I wouldn’t have looked at,” Moffat told Speedcafe.com.

“I won’t be back with GRM full-time next year and beyond that I sit here now not knowing what I will be doing next year, but I hope to be driving something in some format but what that will be I don’t know.

“I’m not clear on my future at the moment apart from my immediate future which is to do as well as I can for the remaining races for GRM.”

The son of Australian touring car legend Allan Moffat, James, will chalk up his 100th round start at this weekend’s ITM Auckland Super Sprint at Pukekohe.

While keen to end his season on a positive note at GRM, Moffat is hopeful of landing a top enduro drive for 2018 which he could dovetail with other programs in Australia.

“I think for me and like a lot of blokes in pit lane racing is all I know,” he added.

“Particularly in Australia you strive to drive at the top level which is Supercars.

“I think at the age I’m at I still need something to scratch the itch, so I would want to be driving something because I like driving race cars.

“At the moment I don’t know what that might be. Hopefully I can put something together that keeps me racing, but not necessarily to keep sharp.

“Hopefully I can put myself with a team for the enduros where we can go and have a crack at the three races.”

Moffat made an encouraging start to this weekend’s penultimate round of the campaign after finishing seventh in Friday’s opening practice before electing to focus on race runs in Practice 2.

“I think the first session was encouraging for us and we did a little bit of a different program in the second session with a longer run,” he said.

“I don’t think where we ended up (19th position) was a true indication of the speed we have.”