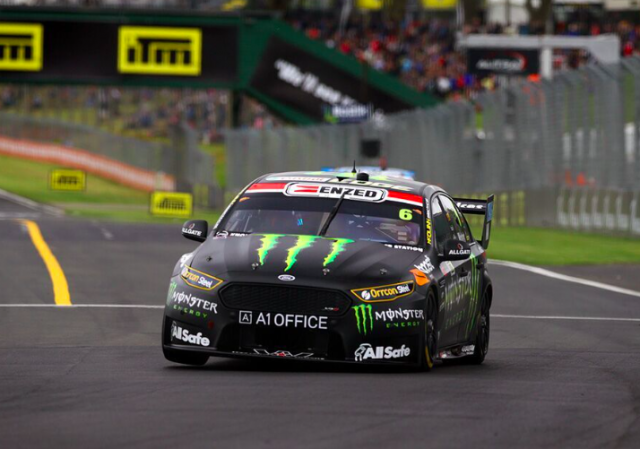 Cameron Waters put Prodrive on top of the times in final practice for the ITM Auckland Super Sprint at Pukekohe Park Raceway.

Waters struggled for speed in opening practice but bounced back in Practice 2 as he fired in a 1:02.56s effort in the final moments of the 40 minute session held in overcast conditions.

The Monster Energy driver was fast throughout having held top spot early on before jumping back up the order after his final run.

“We weren’t too fazed after Practice 1, we knew we had a few problems,” said Waters.

“It was all just a matter of tuning it up. We did that and the car is mint now, so I’m pretty happy.”

Triple Eight’s Jamie Whincup was among a group drivers to improve late on as he moved to second 0.14s shy of Waters.

Ford showed strong pace across its six cars with four Falcons inside the top five.

Mark Winterbottom was third fastest ahead of Shell V-Power Racing’s Scott McLaughlin, who was the first driver to dip into the 1:02s bracket.

Chaz Mostert ended the session in fifth while Shane van Gisbergen leapt from 22nd to sixth with his final lap in the #97 Red Bull Holden.

Triple Eight made changes to the front end of van Gisbergen’s car in between practice sessions.

The 2016 Supercars champion apologised to Winterbottom in the pit lane after he appeared to impede the The Bottle-O Falcon.

Tim Slade was fast early on as he headed the time sheets before sliding down to seventh at the chequered flag.

The session ran without issue although Lucas Dumbrell Motorsport’s Jack Perkins sustained damage on the left rear late in the running that saw him stop on the circuit.