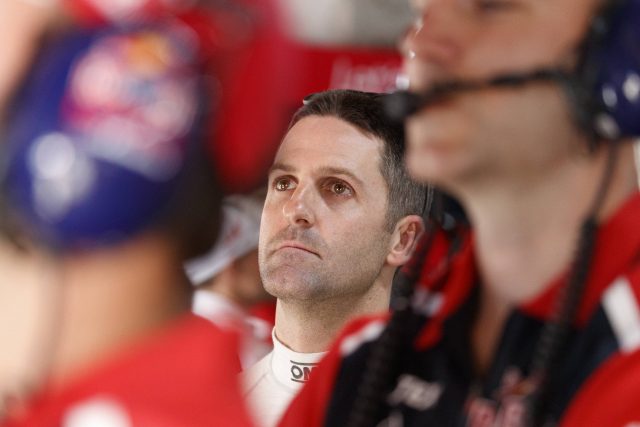 Jamie Whincup says there is no rush to sign a new deal at Triple Eight following the news team-mate Shane van Gisbergen has committed until at least the end of 2019.

The six-time Supercars champion’s current contract at the factory Holden team expires at the end of next season.

Whincup’s arrangement has the most imminent expiry of all three Triple Eight drivers after Craig Lowndes penned a new two-year deal until at least the end of 2019 in May.

This week the team announced an extension for reigning series champion van Gisbergen ahead of this weekend’s ITM Auckland Super Sprint.

Despite the recent renewals, Whincup says he is yet to contemplate a new deal, but expects to hold discussions once the season is over.

The 34-year-old joined Triple Eight in 2006 where he has since won a record 106 races and six championships.

“I have a deal for next year and I haven’t even thought about that to be honest and I will probably do that at the end of the year or in the New Year,” Whincup, told Speedcafe.com.

“There is no rush and I’m quite happy, I just haven’t had time to think about it.”

Switching his focus back to the current campaign, the championship leader is braced for a tough challenge against the Shell V-Power Racing Fords of Scott McLaughlin and Fabian Coulthard at Pukekohe Park Raceway.

Whincup holds a 17 point lead over Coulthard while McLaughlin is just 27 points adrift with four races of the season remaining.

With the campaign fast approaching its climax, the Red Bull Holden driver says this weekend is a ‘critical’ round.

“The Kiwis are fast here so they are going to hard to beat and I will hang in there and see what I can do,” he added.

“It is a critical round for the championship.

“I think you have to take big risks because if you just cruise around you just end up running second. You have got to go hard or go home.

“It doesn’t feel any different leading the championship, 30 points ahead or 30 points behind feels exactly the same in this game.

“The Shell Fords are very fast down the straights and there are lot of those here and they are going to be tough to beat.

“We will do what we can and focus on our job and see where we end up.”

The ITM Auckland Super Sprint will begin on Friday at 1115 local time.