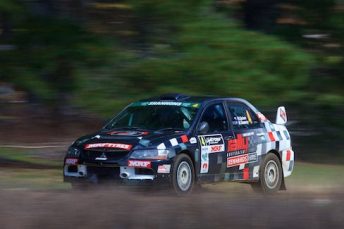 A total of 58 cars will compete across the Australian Rally Championship and state-level competition in Coffs Harbour in a fortnight’s time.

Local hope Nathan Quinn of the Coffs Coast Rally Team, who is also cross-entered in the World Rally Championship round, is Taylor’s nearest competitor.

The Mitsubishi Lancer Evo IX driver comes into the event off the back of a dominant performance in the last round in South Australia.

Harry Bates, however, has given up on his outside chance to win the national championship in deference to testing himself in the WRC field.

The second-generation rally driver has opted to fit the popular Michelin tyres to his AP4 Toyota Yaris instead of MRF tyres, meaning he cannot score points in ARC.

Bates had led the championship until teething problems for the brand-new Yaris made for a disastrous showing in Rally SA.

Rally Australia also features the new-for-2017 ARC2 finals, a winner-takes-all final for each of the 2WD and 4WD classes.

In 2WD, Stephen Mee (Toyota Corolla) will go up against Nathaniel Dillon (Suzuki Baleno), while Lewis Bates has opted instead to have his first outing in the Neal Bates Motorsport 4WD Toyota Corolla S2000, ruling him out of the final.