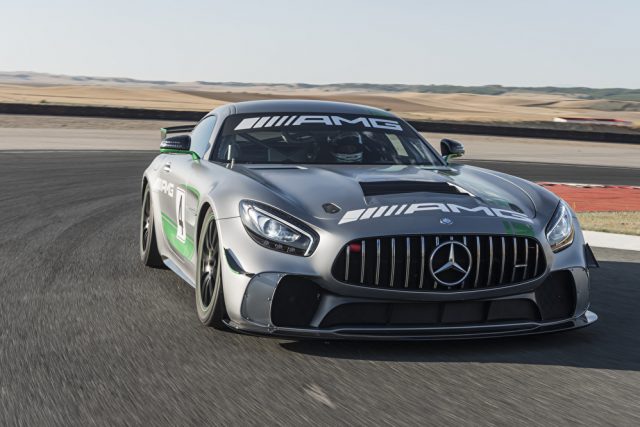 As many as six Mercedes-AMG GT4s will be imported by gentleman racer Mark Griffith to run in Australian GT next year.

Mercedes revealed its GT4 fighter in July this year before the car made its racing debut in the VLN series at the Nurburgring in August.

Griffith has raced a Mercedes-AMG GT3 in both the Australian GT Championship and Australian Endurance Championship for the past two years, but has been drawn to the GT4 due to the extent of professional drivers now racing in the GT3 ranks.

The trucking magnate, who also dabbles in production cars and Aussie Racing Cars, will have two of the new cars available in time for the 2018 Australian GT season-opener, another two in June, and two more after that when cars are available to fill the order.

He is also entertaining the possibility of racing his existing GT3 in the Intercontinental GT Challenge, which encompasses the Bathurst 12 Hour, Spa 24 Hours, California 8 Hours (Laguna Seca), and Sepang 12 Hours.

“I’ve been told I’ll get two in the end of February, ready to race in our championship, and the next two possibly end of June, and the next two or whatever as production keeps up with it,” Griffith told Speedcafe.com.

“I’ll race one of the first ones, unless something changes with what they’re doing with GT3,” he added, referring to regulations around car and driver elibigility.

“We might do that Intercontinental series next year and then just run the GT4s here, but we’ll wait and see what happens, what categories and what tracks they’re offering (on the Australian GT calendar), and what we’re doing.”

The GT4 Mercedes would not be eligible for the Bathurst 12 Hour, with the possible exception of Invitational classification, given that it will first be homologated for racing in 2018.

Eligibility for the once-around-the-clock race at Mount Panorama is based on the preceding year’s homologation.

Griffith says that the opportunity to race exclusively against other gentleman drivers, rather than compete against foreign stars, is part of the appeal of the switch.

“They’re not worried that they’ve got a superstar dive-bombing them in a corner.

“I hope GT4 becomes that big that they don’t run with the GT3s because they messed up GT3 by allowing pros and if you don’t have one, you don’t come anywhere.

“Also, the pros don’t have any money to pay for it, so it makes it really expensive.”

While Griffith has not driven the GT4 himself, he has inspected the car in Germany and said that Mercedes factory driver Bernd Schneider, who was involved in its development, spoke glowingly of the car.

Griffith also expects that it will be race-ready despite a short time from delivery to first race, if the Australian GT season opens in Adelaide as it has in past years.

“It was stripped down, having its rebuild, ready for its first race that they went and did, but by all accounts everyone’s stoked.

“Bernd Schneider drove it at Spa the other day in the wet; he said it was just awesome.

“It will be, it’ll be like the GT3. Mercedes make a good product, and so do Audi, so do the others, and as soon as the cars arrive, they’ll be competitive straight out of the box.”