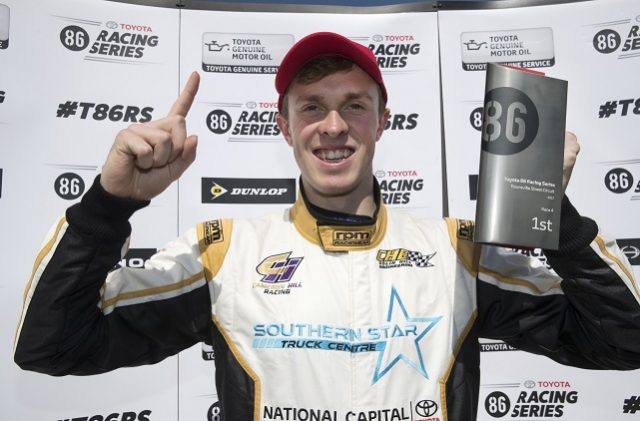 Hill will race a car organised by category manager Geoff Short in Round 1 of the New Zealand Toyota 86 Championship, his first overseas start outside of karts.

“I haven’t raced overseas in a car before, but I’ve always watched the Pukekohe Supercars races on TV and wanted to experience the circuit,” said the Canberran.

“When the opportunity came up to race in this weekend’s event, I grabbed it with both hands.

“Any chance to race on a new circuit is valuable so a big thank you to Geoff for giving me the drive this weekend.”

Hill has displayed the best raw pace in his domestic 86 series, having taken pole position at each of the four rounds thus far and won five races.

However, he is wary of his lack of local knowledge and the subtle differences in technical specifications between Australia and New Zealand.

The Australian series runs all-weather road tyres supplied by Dunlop, in contrast to the Michelin slicks used in New Zealand, while there are also differences in brake and suspension packages.

“I will be racing against local drivers who already have experience at Pukekohe, and I only have one practice session to learn the track and then it’s straight into qualifying and racing,” said Hill.

“Also, the New Zealand Toyota 86 race cars have some subtle differences compared to the Australian versions, especially with brakes and tyres, so I will need to get my head around the best driving technique.

“One of the best things this weekend is there’s no championship situation to think about – I can just focus on doing the best job I can in each individual race.”

The ITM Auckland Super Sprint will be held from November 3-5, before the final round of the Australian Toyota 86 Racing Series at the Coates Hire Newcastle 500 on November 24-26.