Alex Peroni has finished the Formula Renault Eurocup season as the highest placed Australian in the Barcelona round and the points standings.

The Tasmanian (Fortec Motorsports) finished with results of 18th, 11th, and eighth across the three races, narrowly avoiding a pile-up at the start of Race 2 which took out 13 cars and caused the race to be red-flagged, to take 10th in the championship.

The Race 2 mess was caused when Max Defourny (R-Ace GP) was turned sideways near the front of the field through the opening complex of corners, triggering a chain reaction that ultimately accounted for the other four Australians.

Thomas Maxwell (Tech 1 Racing) finished 13th in the other two races (from 22nd and 18th on the grid, respectively) and 16th in the standings.

Thomas Randle (AVF) was disqualified from Race 1 due to not meeting the minimum fuel requirement, finished 14th in the final race of the year, and 14th in the championship despite joining mid-year.

Zane Goddard (Arden) only had a 15th in Race 1 to show for his efforts having not started Race 3, and he finished 20th in the championship.

The Gold Coaster was admitted to hospital as a precaution for back pain incurred in the crash but has since been discharged.

Luis Leeds (Josef Kaufmann Racing) finished 29th and 23rd in the other two races, and 18th in the championship.

Robert Shwartzman (R-Ace GP) won the first two races but it was Sacha Fenestraz (Josef Kaufmann Racing) who sealed the title with a second placing in Race 2 and capped off the season with a win in Race 3. 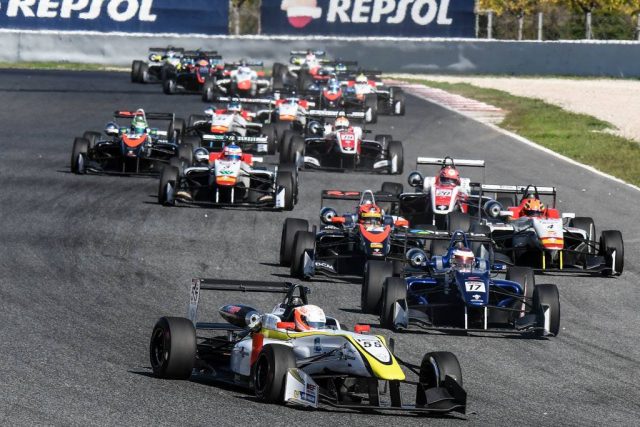 Australian Joey Mawson has taken fourth in Race 2 in a one-off Euroformula Open appearance at Barcelona, having recorded a DNF in Race 1.

In a late call-up to drive for BVM Racing, the Mawson qualified eighth for Race 1 in the 21-car field.

He dropped to 13th when he had to take to the grass at the start before contact with Cameron Das brought his race to an early end on Lap 6.

Mawson qualified fifth for the final race of the season, less than 0.2s from pole, and briefly ran third after pole-sitter Ameya Vaidyanathan made a tardy start.

Vaidyanathan quickly put Mawson behind him again, but the 21-year-old managed to hold out Devlin DeFrancesco and achieve BVM’s best result for the season.

“Overall it was a good weekend,” said the Sydney driver.

“It was rounded out with a strong fourth position which was a very good result for the team considering they hadn’t scored any points all year.”

DeFrancesco had won Race 1 while Race 2 went the way of Felipe Drugovich.

Harrison Scott had already secured the title with two of eight rounds to spare. Tom Chilton and Norbert Michelisz each took a race win in the eighth round of the World Touring Car Championship at a wet Motegi.

Chilton (Sebastien Loeb Racing Citroen) took an easy win in the Opening Race, taking the lead from second on the grid and not being challenged thereafter.

Bjork leads the championship by a reduced margin heading to Macau on November 17-19.