Kyle Busch clear of wreckage to win in Martinsville

Kyle Busch clear of wreckage to win in Martinsville 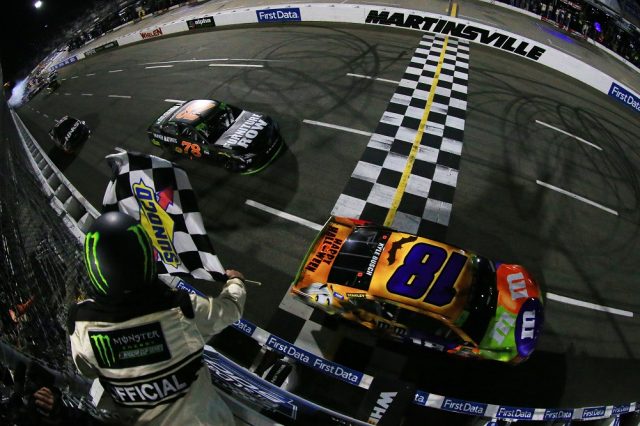 Kyle Busch has taken victory in the first race of NASCAR’s Round of 8 as mayhem erupted behind him at Martinsville Speedway.

In an overtime finish, Busch (#18 M&M’s Joe Gibbs Racing Toyota) moved Denny Hamlin aside on the penultimate lap to take the race lead, but still had work to do to beat Martin Truex Jr. to the chequered flag by 0.141s.

In the background, Ryan Blaney got into the side of Hamlin near the head of the pack, causing cars to spray all over the main straight on the 0.526mi short track.

Just minutes earlier, Hamlin was the aggressor in a controversial incident when he unloaded then-leader Chase Elliott with three laps of the scheduled 500 remaining, bringing out the Caution which caused overtime.

The two prangs allowed Clint Bowyer to take third and Brad Keselowski, who won the first two stages of the First Data 500, fourth.

Keselowski, however, might have won the race given that he held a relatively comfortable 1.7s lead with eight laps to go.

However, Joey Logano spun due to a cut tyre, caused by contact with Busch, leading to a Caution.

The incident proved costly, as Elliott took the lead on the restart with Hamlin following past, before those two came together a lap later.

Hamlin was ultimately seventh, behind Kevin Harvick and Trevor Bayne.

Of the other playoff contenders, Blaney finished eighth, Jimmie Johnson 12th, and Elliott down in 27th.

Truex Jr. retains his series lead as Kyle Busch secured his place in the season-ending Championship 4.

The second race of the Round of 8 is the AAA Texas 500 at Texas Motor Speedway on Monday 6 November (AEDT).