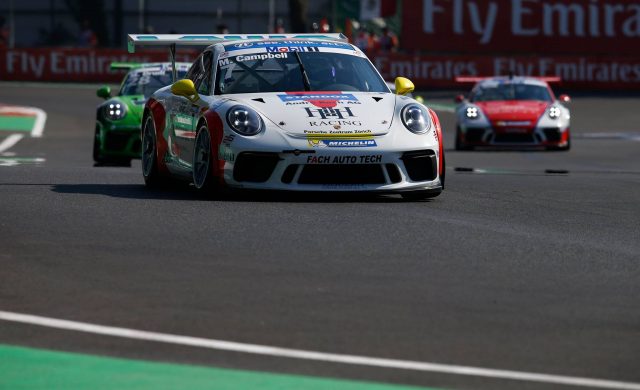 Matt Campbell takes his third win of the year

Matt Campbell has kept his Porsche Mobil 1 Supercup hot form rolling along with victory in the opening race of the twin-event as part of the Mexican Grand Prix.

Starting second on the grid alongside Dennis Olsen, Campbell took the lead soon after the start as championship leader Michael Ammermüller slipped into second.

Campbell then went about building a lead that he held through to the completion of the 16-lap race. The victory follows on the back of the most recent round at Monza in Italy and his victory earlier in the year in Austria.

With Ammermüller’s attention more focussed on championship contender Olsen, it was smooth sailing for the Queenslander as he collected his third first-place trophy of the season.

Ammermüller’ holds a slender five-point lead over Olsen in the overall championship, while Campbell has a firm lock on third place.

“I managed to snatch the lead in the sprint to the first corner. That was the key to success,” said Campbell.

“I’m taking up Sunday’s race from pole position and perhaps I can win again. My goal is to finish the season as third overall in the championship.”

Campbell will be looking to close-out the season in style after scoring his fifth pole of the season earlier in the day for the final race of the year which will be the curtain-raiser for the Mexican Grand Prix on Sunday afternoon local time.

VIDEO: Campbell and the other drivers speak after the race