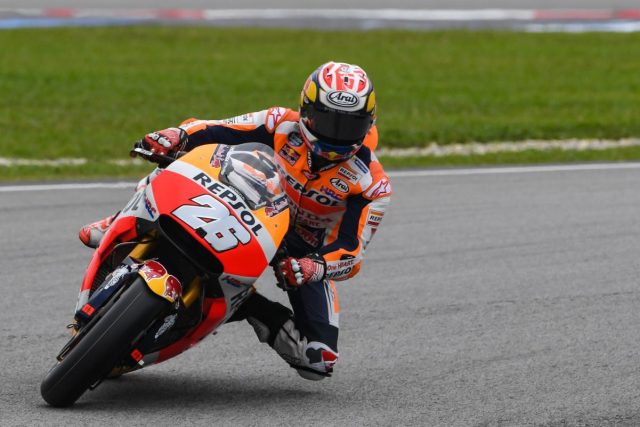 Dani Pedrosa took until the last moment to score pole position for the Malaysian MotoGP as Marc Marquez qualified seventh after a crash.

Valentino Rossi was fastest when the chequered flag flew at the end of Q2 but will start fourth after a scintillating end to the session, in which outside championship hope Andrea Dovizioso finished third-fastest.

Pedrosa set a 1:59.212s well after the clock had gone zero on the 15-minute session, the Repsol Honda rider securing his third pole of the season.

He was actually the fourth man to hold provisional pole after the chequered flag, with Dovizioso bumping Rossi and then Zarco bumping Dovizioso.

“Of course you have to take risks; I made a couple of mistakes in my last run,” said Pedrosa.

“I’m very happy because a third pole of the year is very positive; normally I don’t get so many poles.

“We hope tomorrow to have a dry race because yesterday in the wet we struggled a lot.”

Zarco (Tech 3 Yamaha), who had held top spot after the first runs, needed only another 0.017s to finish in first position, but will instead start middle of the front row.

For Dovizioso, who in turn was only 0.007s slower than Zarco, a front row start is important for the factory Ducati man’s title hopes as he trails Marquez by 33 points with just two races remaining.

Marquez crashed on his first flying lap and while he regrouped to temporarily take his Repsol Honda to third, he was not fast enough in his final run and was bumped back to seventh.

He will start next to the factory Suzukis of Alex Rins and Andrea Iannone, the former of whom topped Q1.

Espargaro was the other man to come through Q1 as all of the heavy-hitters had already earned direct passage to the second quarter-hour hit-out.

Michael van der Mark, filling in for ill Tech 3 Yamaha rider Jonas Folger, crashed in his first ever MotoGP qualifying session and will start last in the 22-bike field.

The second-last race of the year will run over 20 laps tomorrow from 1800 AEDT.