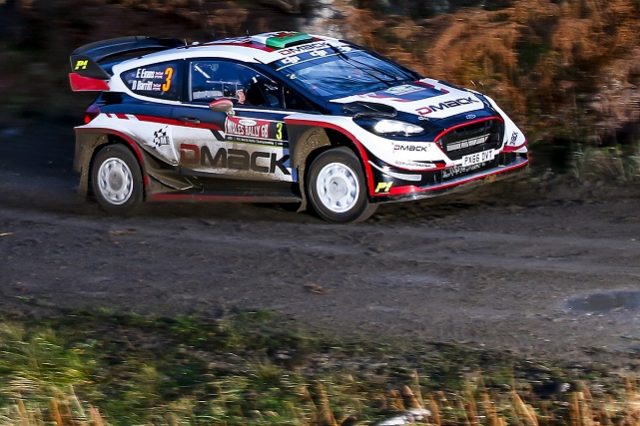 Elfyn Evans has taken a 24.6s lead thanks to three stage wins on the first full day of Rally Great Britain.

Evans jumped from fifth after Special Stage 1 to the rally lead by taking out SS2 of Myherin.

The M-Sport driver lost a little time on the short Sweet Lamb stage but topped Hafren to lead at the end of the first loop of the day’s three stages.

Evans picked up where he left off at the start of the afternoon loop by winning SS5 Myherin, going 4.3 seconds faster than anyone else in his DMACK-shod Ford Fiesta.

He was then beaten to the fastest time on the next two stages by Sebastien Ogier and Thierry Neuville respectively, but still stretched his lead over closest challenger and team-mate Ott Tanak to 24.6s.

“The conditions were really challenging; the grip levels were so changeable and we had a bit of understeer, but I think that was the same for everyone,” said Evans.

“There’s obviously pressure leading your home event, but it’s all going well at the moment.

“Tomorrow will be familiar territory for me, but you never know how it’s going to work out and there’s still a long way to go – it’s certainly not going to be plain sailing. Whatever happens, though, we’ll certainly be giving it our all.”

Tanak had looked feisty in the morning but was slower than Ogier on all three stages of the repeat loop – although he will head into the second day with 2.2s over the Frenchman in an M-Sport one-two-three.

Ogier’s victory on SS6 Sweet Lamb was his first since Thursday evening’s superspecial, and was part of a stronger afternoon loop that hoisted him back onto the tail of his team-mates.

Neuville’s SS7 stage win was the first non-Fiesta victory of the event, and elevated him to fourth in the order.

The Belgian complained that he was not happy with his Hyundai i20 after his stage-winning run through Hafren, but he would be 0.3s away from Ogier in the overall order without a 10-second penalty incurred overnight. 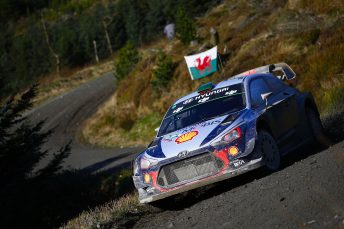 After missing Spain Hayden Paddon is back in Wales

Toyota driver Jari-Matti Latvala and Kris Meeke, who lost two positions on the afternoon’s final stage in his Citroen C3, separate Neuville and his team-mate Andreas Mikkelsen in the classification.

The third and fourth Hyundais of Dani Sordo and Hayden Paddon are eighth and ninth in the order, while Juho Hanninen is 10th.

“The conditions were tricky, as you’d expect in Wales, but I’d almost have preferred it to be raining,” said Paddon.

“We changed the settings for the afternoon loop but the conditions changed as well, so it’s a bit of a moving target. Tomorrow is, of course, another day and I hope we can enjoy it a bit more.”

Craig Breen stopped on the final stage of the day, with Citroen team-mate Meeke reporting his C3 was stuck in a ditch.

He earlier lost time on the first Hafren run with a slow puncture.