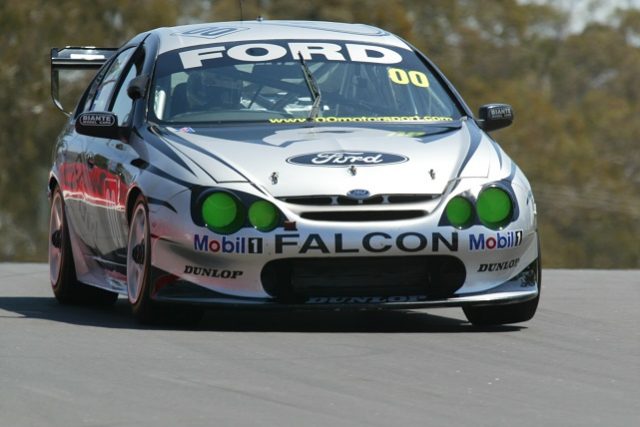 Craig Lowndes’ famous ‘green-eyed monster’ is one of over 150 Falcons featured in a brand new publication from Aaron Noonan and the V8 Sleuth team titled The Falcon Files.

A jam-packed 240-page magazine that acts as the instant industry and fan guide to every V8 Supercar Falcon built and raced, the new release has been an instant winner with ‘blue oval’ fans.

Speedcafe.com has 10 copies of The Falcon Files to give away: CLICK HERE to enter the draw.

If you aren’t lucky enough to win a copy, order yours online now by CLICKING HERE.

The 00 Motorsport AU Falcon which Lowndes drove in 2001 and 2002 is just one of the cars featured in The Falcon Files.

With its trademark green headlights, the Gibson Motorsport-built Falcon was introduced shortly after Lowndes had made the big move from Holden to Ford.

Featuring a striking silver and black livery designed by Ford designer Nick Hogios, GMS 014 made its racing debut at Bathurst in 2001 in the hands of Lowndes and Neil Crompton and was the first Falcon built by Gibson Motorsport since it had switched to Ford for the 2001 season. 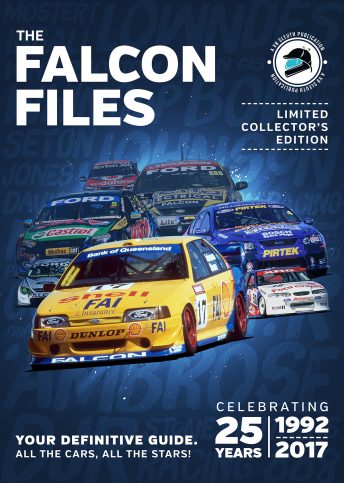 The team’s ex-Stone Brothers Falcon raced by Lowndes during the first half of the year had been designated GMS 011 and the ex-Colourscan AU driven by team-mate Rodney Forbes as GMS 012.

The team had elected to skip the unlucky ‘013’, so therefore this new car was dubbed chassis 014.

Lowndes raced it for the remainder of the 2001 Shell Championship Series, although it was rested for the non-championship Gold Coast event.

After finishing 17th at Bathurst (where Lowndes hit the wall in slippery conditions while dicing for the lead with Mark Skaife and Greg Murphy) and 11th at Pukekohe, the new Falcon scored its first podium finish, and indeed first race win, in the season-ending V8 Ultimate round at Sandown.

Lowndes drove GMS 014 again in 2002, but under the 00 Motorsport banner after Fred Gibson parted ways with team owner Bob Forbes from the team that had carried his name.

The three-time V8 Supercars champion crashed into a stationary Max Wilson at Phillip Island (after the Brazilian had laid a smoke screen which meant no other drivers could see), causing the car to be sidelined for a time.

However, Lowndes had his ‘monster’ back at Hidden Valley and drove it for the balance of the season.

GMS 014 took a podium finish at the last ever Canberra 400 before Lowndes and Crompton finished sixth in the Queensland 500.

However, their Bathurst assault came to an end while running towards the front; a plastic bag blocked the car’s radiator and it was forced to retire when it cooked itself in the latter stages of the race.

The ‘green-eyed monster’ never actually ended up winning a round of the V8 Supercars Championship, though it took Lowndes to a runner-up round result in 2002 on the Gold Coast, its final podium appearance.

It claimed a race win at Sandown in 2001 and another at Albert Park (non-championship) in 2002, but remains a huge favourite of Ford fans despite its dearth of wins.

Lowndes departed for Ford Performance Racing for 2003 so his former AU ended up moving into racing retirement.

While the rest of the 00 Motorsport hardware was sold to WPS Racing on the Gold Coast at the start of 2004, this car was not part of that deal and was returned to Bob Forbes in Sydney along with the ex-SBR car that Lowndes had driven for the team.

This famous Lowndes Falcon was displayed at the inaugural Sydney 500 in 2009 and has also spent time in the National Motor Racing Museum at Mount Panorama, Bathurst.

It’s also been back on the track, making an appearance a few years ago at the Muscle Car Masters at Sydney Motorsport Park.

The 2001/’02 ‘green-eyed monster’ Gibson/00 Motorsport Falcon may not have delivered a pile of silverware for driver or team, however it has written its own special chapter in V8 Supercars racing history for Ford fans.

It’s just one car that can be enjoyed by fans in The Falcon Files, which has become the instant bible for chassis history for Ford Falcon V8 Supercar in this country.