Chris Holder is out to defend his Australian GP title – Pic:  Russell Colvin

The anticipation for this weekend’s QBE Insurance Australian FIM Speedway Grand Prix at Etihad Stadium got into full swing this afternoon with practice ahead of the final round of the series.

Australia will have six riders in the event, with Jason Doyle drawing the lion’s share of the attention as he chases the world title.

Defending event winner Chris Holder is a former champion of the series and he was impressed with the track that has been laid inside the stadium.

“The bike held together really nicely too and should be really competitive tomorrow. I am so looking forward to getting back out on the dirt – like a kid before Christmas!

“This track is unique as it’s an indoor temporary one and it is awesome to ride, and now that we have all torn it up a bit, it’ll be even better tomorrow! Definitely one of the most enjoyable tracks of the series!” 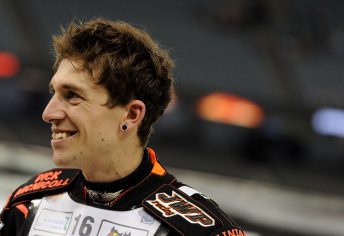 Sam Masters was pleased as he tested his methanol burning bikes in the practice sessions.

“Felt alright out there and both my bikes are great but it could be a different story tomorrow because that’s Speedway,” said Masters.

“I rode the one that I thought had the better setup – We’ll rock up tomorrow with the best package to secure a good result.

“It’s always great to come and compete in front of a home crowd its really different from racing overseas and I cannot wait to get out and have a crack!” 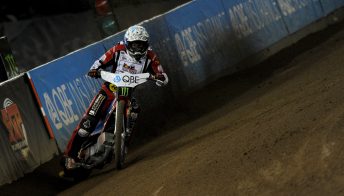 For wildcard Justin Sedgmen the chance to race in front of a large home crowd has him excited and ready to make the most of the opportunity.

“It’s an awesome place to come and have a ride,” said Sedgmen.

“I would be considered a local rider being from Mildura (Victoria). There is a lot of people who think I shouldn’t be here but here I am! I just want to do the best I can out there in front of all my friends and family.” Brady Kurtz still trying to get used to Eithad Stadium in speedway mode and not a place for football codes.

“It’s pretty cool to come to Etihad Stadium and ride in it! It’s such an iconic football arena,” said Kurtz.

“The track was starting to loosen up towards the end of practice today, but I am sure they will sort it all by tomorrow so that it’s a super smooth and fast track.” Davey Watt got the most out of practice as the high compression, non-braked, non-geared rigid machines blasted around the fast and wide track.

“It’s going to be a circuit that everyone likes, it’s nice and wide, with loads of lines to choose from. For that reason alone, it will be great to see what goes down tomorrow,” said Watt.

“The fast lines won’t show up until late in the meeting and that’s when it’ll all be going down to the wire. It’s such a great experience to be here in Melbourne and I’m blown away to be part of it all! It’s going to be a great show!”

Racing is set to get underway from 7pm Saturday evening.