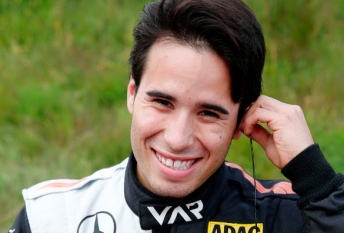 Rising Australian single-seater star Joey Mawson will contest the final round of the Euroformula Open at Barcelona.

The 2016 German Formula 4 champion will join BVM Racing for the one-off drive in the second tier European Formula 3 series.

Mawson has been competing in the FIA European Formula 3 Championship this season, where he finished 13th in his rookie season, driving for Van Amersfoort Racing.

The 21-year-old Sydney driver is looking forward to extending his season with a last minute outing in Barcelona.

“It’s been a very last minute and unexpected drive this weekend. It’s been a little bit of a different week to what I expected at the start of it but it’s all very exciting,” said Mawson.

“The team I’m with has had a very tough year, they’ve asked me to come along and help them out at the final round.

“I’ll be aiming to work with the team and my engineer, who I know from when I did the MRF Challenge, to get some points on the board for them.”

The Euroformula Open cars are similar to what Mawson has driven throughout 2017, however, there are some differences that he will need to adapt quickly to.

“The Euroformula cars have a different tyre and engine package to what I’ve been driving this year, so I will need to adapt to it quickly to ensure that I give myself the best opportunity at a good result,” he added.

“I’ve tested previously at Barcelona but never raced here. I’m really looking forward to the challenge but the main thing is that I’m staying race sharp.”

Mawson is set to take part in two 17-lap races over the weekend.