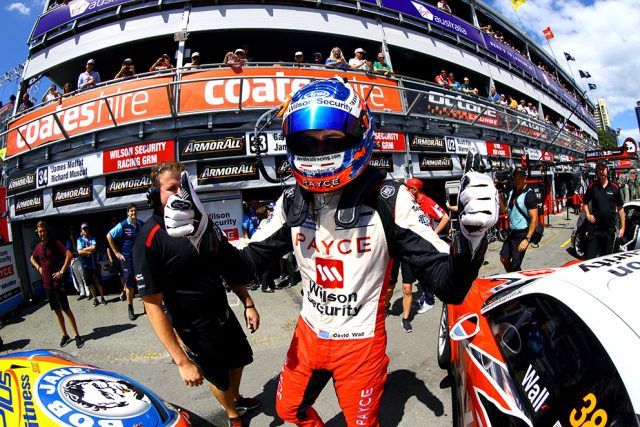 New Porsche Carrera Cup Australia champion David Wall says that he has found a home in the championship which he wants to race in “indefinitely”.

Wall clinched the all-Porsche championship for the first time at the Vodafone Gold Coast 600 in his fifth full season in Carrera Cup and second since exiting Supercars as a full-time driver.

The 34-year-old struggled during his four seasons in the Virgin Australia Supercars Championship, in stints at Brad Jones Racing, Dick Johnson Racing, and Garry Rogers Motorsport.

However, Wall seems to have found his calling in Carrera Cup, finishing the season third in 2016 before edging out Andre Heimgartner to the title this time around.

Wall says that while he enjoys his enduro co-driver role, which he has filled at GRM and Nissan Motorsport in the last two years, he would not entertain a fully-fledged return to Supercars.

“I still get to scratch the itch doing the enduros and I enjoy that, and I did this year with Nissan Motorsport and had a good time with Rick (Kelly),” said Wall at Carrera Cup’s end-of-season dinner.

“But, when you’re turning up week in and week out, you’re putting absolutely everything into it, and you feel you have the same equipment and maybe the mechanics or the engineer or something’s not quite as good as it could be, that puts you 25th, so some of the days are very hard.

“To come back here and race in Carrera Cup, I’d be happy to race here indefinitely.

“I enjoy the cars, I enjoy the people, and I think everyone respects one another and we’re all here for a good weekend and we all want to do well, so it’s what motorsport should be like.”

Wall also took the opportunity to pay tribute to his late father Des, who passed away in November 2012.

While Wall won the 2009 and 2010 Australian GT Championships, he had not taken out a national title since Des’s death.

Immediately after the final race of the season, Wall explained that he had “been looking for something to dedicate to (his father),” and expanded on the sentiment later that night.

“I’ve been pushing the limits since we lost Dad in 2012 and obviously we spent a period of time in Supercars.

“To get the opportunity to come back to Carrera Cup last year, I was unbelievably happy to get third for my first attempt back with my own team and a great group of guys.

“To come back and get the championship was our goal at the start of the year and I thought it was fitting to give it to Dad seeing it is five years coming up, in about three weeks, since we lost him.”