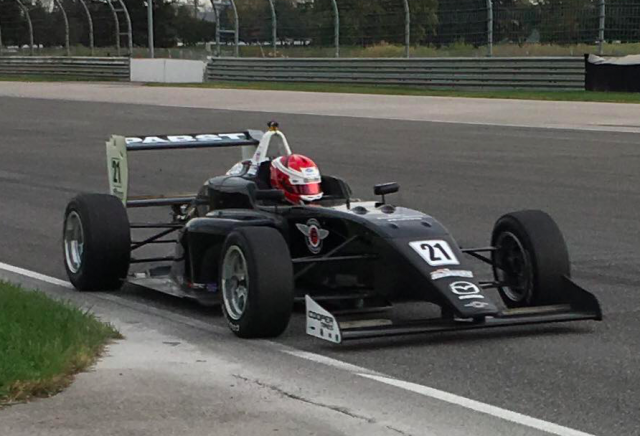 Hunter McElrea has finished fastest of the first-time USF2000 drivers in a two-day Mazda Road To Indy test on the Indianapolis road course.

McElrea was fourth-fastest of the 22 drivers who took part in the test, 0.56s adrift of the ultimate pace but only 0.14s behind Andres Gutierrez.

Like McElrea, Gutierrez was driving a Pabst Racing car.

“It has been really awesome,” said McElrea, who finished fourth in this year’s Australian Formula Ford Series.

“It is my first time driving wings and slicks and being here at this track so it is a pretty big learning experience.”

While any deal for 2018 is dependent on establishing a budget, McElrea was excited to take the next step towards his goal of racing in the IndyCar Series.

“I am racing with Pabst and it is awesome being with such a great team that have given me such a good car to learn in.

“It’s looking pretty good and it is great to be part of the Mazda Road to Indy. I want to go to IndyCar so obviously you start here.”

Anthony Martin was also in action in Indy Lights, finishing the test ninth-fastest out of 11 drivers in an Andretti Autosport car.

“It’s obviously a new car – bigger, faster and a lot more downforce,” said the West Australian of his first drive in an Indy Lights car.

“I’m adapting to it and growing up to it nice and slowly.

“There’s a lot of things that go into it and it’s a huge step up from Pro Mazda, so it’s definitely going to be a nice challenge for me.”