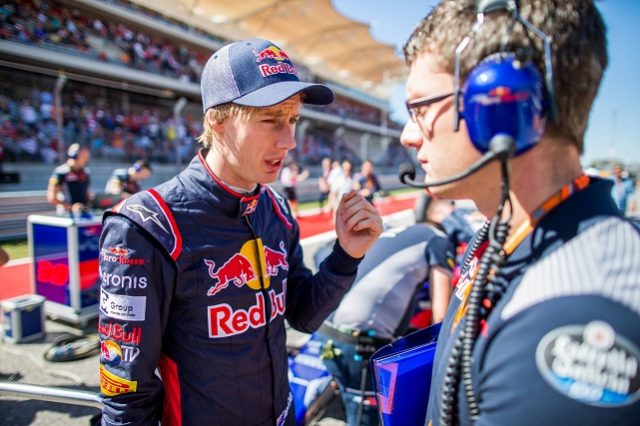 Brendon Hartley on the grid in the United States

Hartley made his Formula 1 debut in the United States Grand Prix over the last weekend, finishing a respectable 13th after starting 19th on the grid in what he described as an “awesome” experience.

The New Zealander, whose full-time drive is in the Porsche LMP1 program which will close at season’s end, was called up amid a shuffle in the STR line-up.

Carlos Sainz Jr. began his loan spell at the factory Renault team, while Pierre Gasly was in Suzuka for the Super Formula final round.

Daniil Kvyat, who had been dropped in favour of Gasly only two races earlier, returned to the grid and finished the race in 10th position.

STR has since issued a one-sentence statement advising that Hartley has been chosen over the Russian for the next race of the season.

“Scuderia Toro Rosso’s Driver Line-Up for the upcoming 2017 Mexican Grand Prix will be formed by the following pairing: Pierre Gasly and Brendon Hartley,” read the statement.

Hartley combined with Earl Bamber and Timo Bernhard to win the WEC race at this weekend’s F1 venue, the Autódromo Hermanos Rodríguez, in early September.

While there is no word on who will drive for the team in the final two grands prix of the season, the 27-year-old’s WEC commitments do not clash with either.

The call-up is a promising sign for Hartley, himself a former Red Bull junior, with STR having not yet confirmed either of its two drivers for 2018.