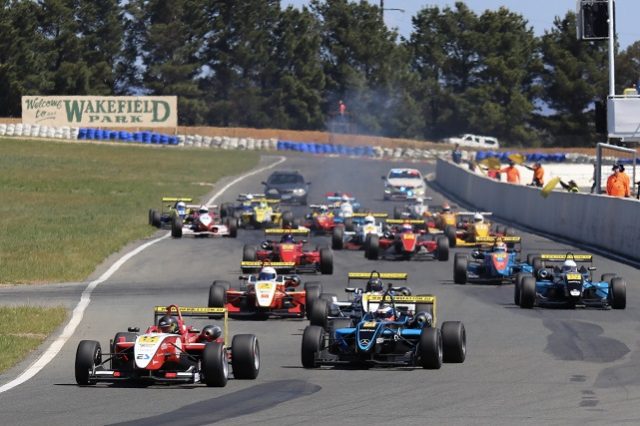 Calan Williams leads the field away

Calan Williams has capped off a series-winning season by taking out the final round of the 2017 Australian Formula 3 Premier Series at Wakefield Park.

Williams (Gilmour Racing Dallara F308) qualified on pole in the 19-strong field and led at the end of every lap in Race 1 as he took a 5.6s win.

He finished second to John Magro (R-Tek Motorsport Dallara F308) in Race 2 and was classified second in Race 3 despite crossing the line first, due to a five-second penalty for a jumpstart.

Jones had qualified fourth and recorded results of seventh in Race 2 and third in Race 2.

The Queensland teenager was using the meeting as preparation for the MRF Challenge in which he will compete over summer.

Magro’s Race 2 win was bookended by results of second and third in the other races.