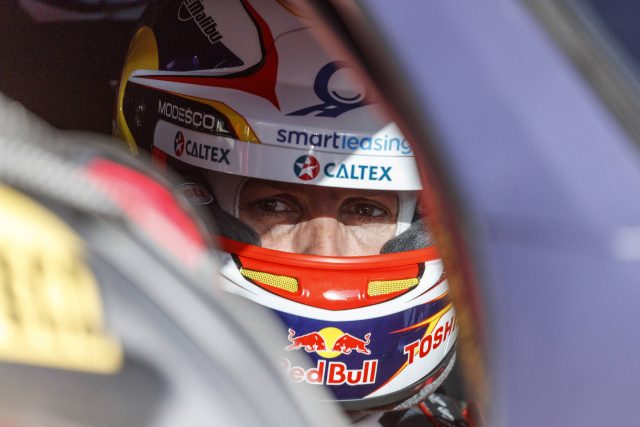 Jamie Whincup believes it is time to take risks with the Supercars Championship set for one of its closest title fights with two rounds of the season remaining.

The six-time champion has assumed the championship lead for the first time this season following a second place finish in Sunday’s Race 22 at Surfers Paradise.

While the trio appear set to do battle for this year’s crown, Prodrive’s Chaz Mostert and reigning series champion Shane van Gisbergen are still in the mix with 189 points covering the top five.

After a conservative strategy in Sunday’s race, Whincup feels risks are inevitable to win the championship, which is likely to be decided at the Coates Hire Newcastle 500 finale from November 24-26.

“I am sure that is what everyone is going to see.

“You want as many points as you can, so the more points you got the better.

“A hundred percent everyone wants the lead. I haven’t had it all year so nice to be leading now. But the only thing that matters is who is leading race two at Newcastle.”

Coulthard has refused to talk about the title until after the Pirtek Enduro Cup, and with the season of endurance over, he is predicting a ‘hard slog’ to decide the title.

The New Zealander helped his cause with an impressive recovery drive from 22nd to ninth on Sunday.

“I’m sure it will be a big fight until the end, they are class guys at the front,” Coulthard told Speedcafe.com.

“It is going to be a hard slog and I’m happy to still be in the hunt, but we need to remain focussed and see where we stack up come November.”

Team-mate McLaughlin echoes his rivals’ views on the title race but has taken confidence from an impressive come from behind victory at Surfers Paradise.

The 24-year-old came from 13th on the grid to score a crucial win to boost his title bid.

“It gave us a lot of belief. I was stoked with fifth but to win is out of this world, and it really puts a stamp down that we are here to party and here to play,” McLaughlin told Speedcafe.com.

“It is great for the series and the fans, I’m excited so bring it on.”

Meanwhile, Mostert believes his title chances are far from over having closed the gap with victory in Saturday’s Race 21.

The Prodrive Ford driver has hauled himself into the mix and is just 126 points shy of Whincup.

He feels there are more twists and turns to come in this year’s title race.

“We are definitely a bit further back than what we would like to going into the last two sprint rounds,” said Mostert.

“But as you can see from Bathurst and these two races even here (at Gold Coast), the weather conditions or bad luck can play a part, no doubt everyone has had several bad races this year.

“I am sure that between all of us there are more bad ones to come before the end of the year.

“You never want to hope on that kind of stuff, you just have to do the best job you can.”

Reigning champion van Gisbergen faces the biggest challenge to claim the title being 189 points back and is refusing to think too deeply about retaining his crown.

“I’m probably not focusing on it, just trying to do the best results I can,” said van Gisbergen.

The championship resumes with a visit to New Zealand for the ITM Auckland Super Sprint from November 3-5.