Triple Eight ‘too conservative’ with Whincup

Triple Eight ‘too conservative’ with Whincup 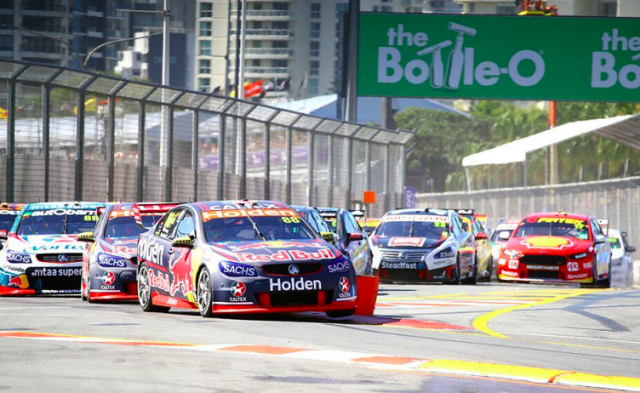 Jamie Whincup felt a strategy that was ‘a bit too conservative’ cost him victory at the Vodafone Gold Coast 600.

The six-time champion brought the #88 Red Bull Holden home in second behind the #17 Shell Ford of Scott McLaughlin and Alex Premat, despite the car having led more than half of the 102 lap race.

Co-driver Paul Dumbrell handed Whincup the lead at the first stop, but the complexion of the race changed when Shell V-Power Racing opted for an aggressive fuel strategy.

McLaughlin pitted on lap 59, after Premat climbed from 13th to fourth in the opening stint, and was then able to undercut Whincup, while starching his fuel to take the win.

Whincup, who assumed a 17 point championship lead, admitted he left the weekend with mixed feelings after missing out on the victory.

“Mixed feelings today, we obviously gave it absolutely everything we had today,” said Whincup.

“At the end of the day we gave it everything but were just a bit conservative, finished with too much fuel, stayed out a little bit too long in the end.

“These boys (McLaughlin and Premat) just took more of a risk and got the reward for it, can’t be any more than congratulations for them.”

Triple Eight team manager Mark Dutton agreed that the squad could have taken more risk and were surprised by the strategy McLaughlin and Premat pulled off to take the win.

While admitting they were conservative on strategy, he felt Premat’s drive set up the win.

“We didn’t run as deep into the pot as we should have,” Dutton told Speedcafe.com.

“They (McLaughlin and Premat) must have run ultra lean to throw in a ‘Hail Mary’ like that and then with Alex’s fantastic drive that actually is what gave them the win.

“We were surprised that they could make and it was very aggressive. They did well and we have to give them credit.

“We were playing the long game for Jamie and we were not taking overly risky decisions, but that wasn’t an accident.

“We didn’t do it to throw away the win. We chose not to react with that level of risk as it wasn’t a win it or bin day for us.

“We came here with the goal of trying to leave here with car #88 in the championship lead and that is what we did.”

Dutton admitted that it had maxed out its strategy for Shane van Gisbergen and Matt Campbell, who came home in third.

“For #97 we were more aggressive and we came in with a bit of conserving, but we were bang on with fuel so that was exactly the right level of aggression,” he added.