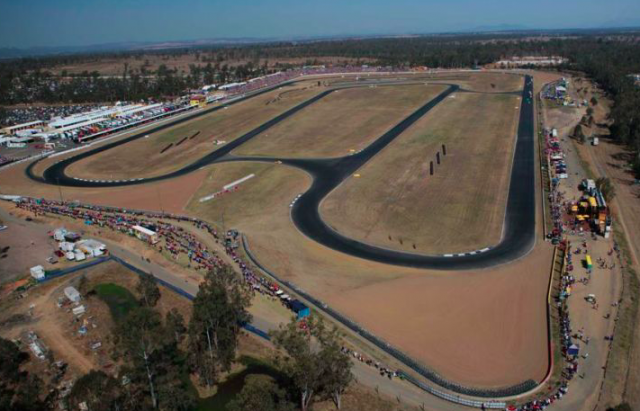 The future of Supercars events at Queensland Raceway and Sandown could depend on the level of safety upgrades needed to keep their international track licences.

Along with Australia’s seven other major permanent circuits, QR and Sandown recently underwent their triennial FIA track inspections to ensure they meet the latest safety standards.

Both circuits are thought to require significant improvements to maintain their FIA Grade 3 international permits for a further three years.

There are concerns that the operators of Queensland Raceway, at Willowbank near Ipswich, and Sandown, at Springvale in Melbourne’s southeast, will baulk at the cost of major safety upgrades.

The tracks have to meet the FIA Grade 3 standard because the Supercars championship is an FIA international series, as well as needing to comply with the safety requirements for CAMS national title events.

Without FIA certification, Supercars would not be able to race at QR or Sandown.

Symes’ report on the tracks is due to be sent to CAMS and the circuits next month, outlining what updates – if any – need to be made.

It is understood that only QR and Sandown have areas of major safety concerns.

QR has only been able to host Supercars events in recent years with additional temporary tyre bundles installed by the series.

The extra tyre barriers are retained for the Shannons Nationals meeting the following weekend before being removed.

There are doubts that the installation of non-permanent safety measures will continue to be acceptable to the FIA and CAMS.

As well as safety upgrades, sections of the Sandown circuit are due for resurfacing because they are too bumpy and degraded to comply with the latest track condition requirements. 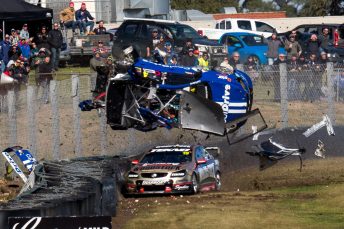 Turn 6 is an area of concern at Sandown after a series of huge crashes like the one Todd Hazelwood suffered at this year’s race Copyright: Daniel Kalisz Photographer

The safety spotlight, though, will be on the infamous Turn 6, where several high-speed car-wrecking crashes have occurred in recent years.

The problem is the close proximity of the tyre barriers, with the run-off area restricted by a close-in spectator mound and the nearby Dandenong Road perimeter.

There are fears the Melbourne Racing Club, which owns the combined horse and car racing complex, will not commit to an expensive corner re-profiling or costly resurfacing when it is widely regarded to be planning to sell the site for redevelopment by the end of the decade.

If Symes’s report decrees that QR and Sandown require safety upgrades, as expected, they may not have to be made immediately to requalify for their FIA licences.

It is understood a practical timescale would be imposed for the improvements to be made.

Outgoing Supercars chief executive James Warburton acknowledged that there were questions about the safety ratings of QR and Sandown.

“We need to wait and see what the (FIA track inspection) reports say,” Warburton told Speedcafe.com.

He indicated that every effort would be made to broker a deal for funding from the Ipswich City Council and Queensland government for the safety upgrades to keep QR in the championship.

“We’ve obviously had lots of conversations over the years with (track operator) John Tetley,” Warburton said.

“John’s more than prepared to make the upgrades – if someone else pays.

“So, obviously, between council and government, we’ll be having those conversations because it’s a really good event for us.”

He held out little hope for major improvements at Sandown, regarding its future beyond the end of this decade as a lost cause.

“As I’ve said to you before, the demise of Sandown is a matter of when, not if,” Warburton said.

“There’s no intention (by the MRC) to do any form of major capital upgrades.

“I think you can see that there will be some requirements (for track upgrades) and if those requirements can’t be satisfied with a temporary solution, it will be up CAMS and the FIA to deal with.

“We have to be careful. We take the safety of our fans and our drivers really seriously.”

Queensland Raceway has a deal to host a Supercars event for at least the next three years, subject to safety compliance, while Sandown’s existing agreement through 2019 also depends on the renewal of its track licence.