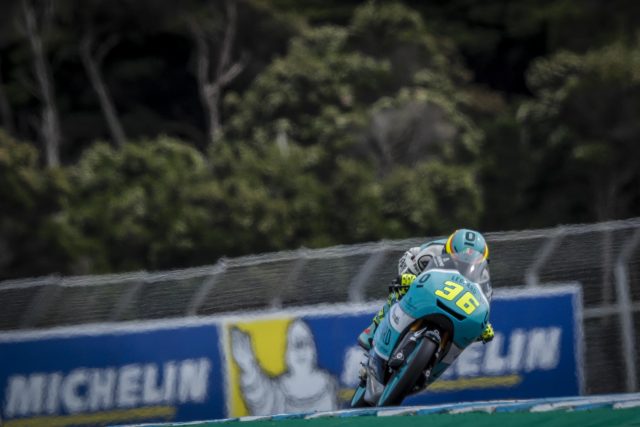 An early red flag for rain has seen Joan Mir take victory at Phillip Island and with it claim the 2017 Moto3 world championship.

Having started on the front row, Mir was leading at the end of lap 15, the point at which results were taken from as heavy rain fell as the field began its 17th lap.

Since the race had reached two-thirds distance before being red flagged, it was declared and not restarted, handing victory to Mir.

Mir worked his way into the lead early in the race, but soon found himself overhauled as a swarm of chasers reeled him in as they headed into Turn 1.

It dropped the Spaniard to sixth before again rising to the lead following a move that saw him climb from sixth to first at Turn 1 on lap six.

He then opened a small gap, and though the pack closed heading into the first corner, he would again open the advantage over the eight-man lead pack during the rest of the lap.

Livio Loi climbed from 21st on the grid to end the race second, putting in a strong ride in support of team-mate Mir, making the first 1-2 for any Moto3 team in 2017.

Pole-sitter Jorge Martin ended the race third after an aggressive ride, while Fenati, who led in the opening laps, was classified sixth behind Gabriel Rodrigo and Enea Bastianini.

Australian wildcard rider Tom Toparis ended the race a lap down in 22nd while six riders were not classified.