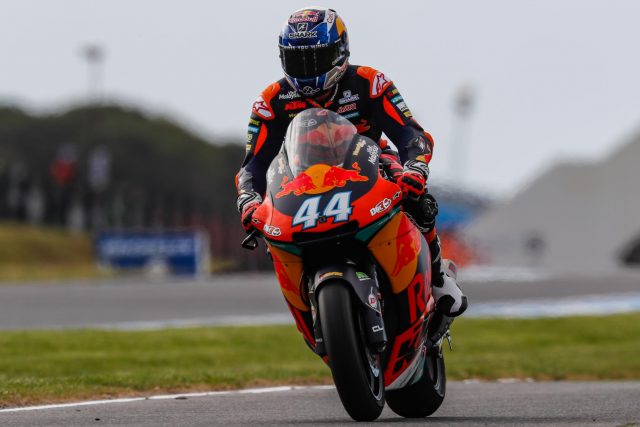 KTM has claimed its first Moto2 race win after Miguel Oliveira and Brad Binder handed the team a 1-2 finish in the Australian Grand Prix at Phillip Island.

Oliveira controlled the race after pulling an early gap over the chasing pack, going on to check out at the front to win despite late rain and a charging Takaaki Nakagami threatening his advantage.

From the outside of the front row, Oliveira and team-mate Binder moved to the head of the race to make for an early KTM 1-2.

Their cause was helped on Lap 2 as Marcel Schrotter and Mattia Pasini crashed out at the Southern Loop, allowing the first three to skip clear.

Along with the two KTMs, championship leader Morbidelli was also clear, while title contender Tomas Luthi struggled for pace and fell from fourth in the opening laps to seventh by mid-distance.

Going the other way was Takaaki Nakagami, who settled into a strong pace after a slow start to climb his way to fourth.

He then latched onto Morbidelli, who had dropped back after a moment at the start of Lap 15 saw the Italian lucky to stay upright having brushed his front wheel against Binder’s rear as they tipped into Turn 1.

Binder too began struggling for pace, a train of bikes forming behind the second-placed KTM, who eventually ceded the spot to Morbidelli at Turn 1 with seven laps remaining.

He immediately dropped another to Nakagami as Xavier Vierge and Jesko Raffin queued up for their chance to pass the former second place sitter.

A lap later and Nakagami was third, demoting Morbidelli in the same fashion as Binder had lost second place a lap earlier.

Further back, Luthi was engaged in a six-way battle for seventh spot, eventually settling for tenth place at the flag as his hopes of the championship slipped ever further away.

Rain in the closing laps saw Nakagami close on the race leader, who’d thrown an arm in the attempt to have race control red flag proceedings.

Nakagami’s pace was too hot for the conditions, crashing out at Lukey Heights with two laps remaining, promoting the squabbling Binder and Morbidelli.

As the rain intensified in the final lap, Morbidelli opted to preserve his championship advantage and dropped off the back of Binder, who trailed Oliveira across the line as KTM claimed its first Moto2 win.

The Moto2 championship heads to Sepang next weekend for the penultimate round of the 2017 championship.