Miller says Australian MotoGP one of his best

Miller says Australian MotoGP one of his best 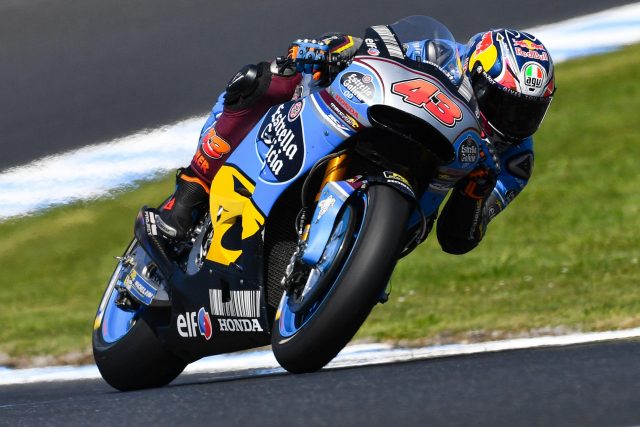 Jack Miller has labelled his performance at the Australian MotoGP as one of his best in the sport’s premier class.

Despite suffering a broken leg in a training crash three weeks ago, the Australian enjoyed strong pace all weekend at Phillip Island, qualifying fifth before taking the lead at Turn 2 on the opening lap.

He held top spot until Lap 4, at which point he became embroiled in an eight-way battle for the race lead.

“It was one of my best ever I think in MotoGP,” Miller told Fox Sports of his performance.

“To be there and fighting with the boys for the victory for most of the race was unreal.

“To be honest, the race, it just felt like Moto3 all over again,” he added.

“I mean, heading into Turn 4 every lap, you didn’t know if you were going to get dive-bombed or what but it was a lot of fun.”

Miller ultimately finished seventh, finding himself caught in the second group after Johann Zarco’s audacious move on Maverick Vinales at Turn 1 split up the lead pack, before struggling for grip on the final lap.

“I gave it maybe a little bit too much at the start,” he explained.

“The first lap I sort of got comfy and I was just waiting for somebody to come past and I was going to match the pace they were doing, just because with the softer option tyre I didn’t want to burn it out too much.

“About six or seven laps in I started understanding what Marc was doing in terms of where he was saving his rear tyre, and I started doing the same as him, but it was maybe a little too late.

“In the last lap, I was right there on (Cal Crutchlow) and I had a few moments leading up to it but I threw it into Turn 2 and it nearly came around on me on the edge of the tyre, I just lost all rubber there – so I ran out of tyre maybe half a lap too early.”