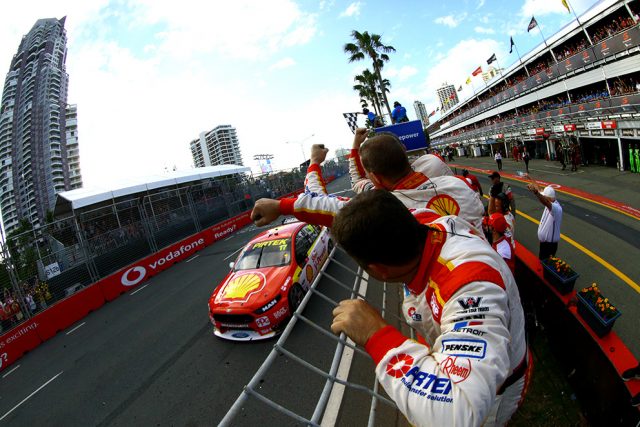 Scott McLaughlin and Alex Premat produced an impressive comeback drive to score a crucial victory in Race 22 of the Vodafone Gold Coast 600.

The #17 Falcon climbed from 13th on the grid after qualifying struggles to take victory after making the most of a strong opening stint and an inspired pit strategy and drive from McLaughlin.

Co-driver Alex Premat drove superbly to hand over to McLaughlin in fourth spot, but it was the decision to pit early on lap 59 that set up the win.

The undercut proved successful as the Kiwi took the lead from Jamie Whincup, who led every lap until that moment, following a strong start from Paul Dumbrell.

Despite question marks over fuel, McLaughlin held firm under pressure from Whincup and Shane van Gisbergen to take the win in a Safety Car free race held in dry conditions.

Whincup came home second with van Gisbergen third after the #97 entry had occupied second until the final round of stops.

The victory has seen Whincup open up a 17 point lead over Fabian Coulthard in the championship after the Kiwi recovered to ninth from 22nd on the grid.

McLaughlin is just 27 points adrift in third after taking his first win since Queensland Raceway in August.

Richie Stanaway (#6 Prodrive) made ground from seventh to fourth in the opening stint ahead of Dean Canto (Prodrive) and Premat, who quickly climbed from 13th to sixth.

Jack Perkins fell from fourth to seventh as he battled an issue with his Mobil 1 HSV Racing Commodore.

While Dumbrell enjoyed a comfortable lead over Campbell at the front, drama struck Stanaway when he made a lunge on Richards at Turn 4 just before the first round of stops.

The Kiwi bent a steering arm after contact with the Triple Eight, which saw him crawl into the pits, while the lead group ducked in for service and a driver change.

Prodrive were able to fix the Falcon but lost two laps in the process.

Whincup took over the #88 in the lead from Dumbrell with team-mate van Gisbergen in second and Lowndes in third.

The #17 Falcon rejoined the race in fourth with McLaughlin at the wheel, after Premat’s strong opening stint.

Whincup increased his lead to 4.5s prior to the second compulsory stops having been aided by a drop off in pace for van Gisbergen.

Van Gisbergen was able to recover and bring the gap back to three seconds, before pitting to cover off McLaughlin, who went for an aggressive undercut.

The strategy worked as he rejoined ahead of van Gisbergen and Lowndes in second.

Second then became the lead after Whincup stopped on lap 64 before rejoining behind the #17 Ford.

McLaughlin opened up a 1.1s lead Whincup with van Gisbergen a second further back.

However, he maintained the position to take the victory from the Triple Eight duo.

Lowndes brought the #888 home in fourth ahead of Winterbottom and Canto in fifth, and Courtney and Perkins in sixth.

Mostert and Owen were seventh while Lee Holdsworth and Karl Reindler took eighth.

The top 10 was completed by Nick Percat and Macauley Jones (Brad Jones Racing).

After scoring a deserved third place finish yesterday, the Freightliner Racing Holden of Tim Slade and Andre Heimgartner was an early casualty.

Heimgartner was turned around by Nissan’s Dean Fiore at Turn 11 which resulted in damage as the former was sent backwards into the wall.

It returned to the race 17 laps down before finishing in 23rd spot behind Cameron Waters and Richie Stanaway in 21st spot.

Reigning Bathurst 1000 winners David Reynolds and Luke Youlden also hit drama, when Youlden found the wall hard at the Beach chicane on Lap 14 , causing terminal damage to the right side of the Holden.

The championship heads to New Zealand for the ITM Auckland Super Sprint from November 3-5.