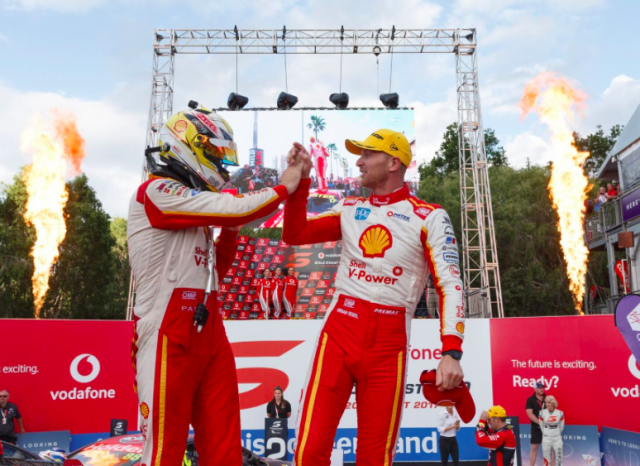 Scott McLaughlin has hailed the performance of co-driver Alex Premat for setting up an impressive comeback victory at the Vodafone Gold Coast 600.

After a costly spin in wet conditions on Saturday, Premat emerged as a standout performer as he guided the #17 Shell V-Power Racing Falcon from 13th to fourth at the driver change.

The championship contender faced a tall order for a strong result having struggled for pace in qualifying that saw the pair miss out on the Top 10 Shootout.

However, Premat’s drive coupled with a ‘big swing’ on set-up and an aggressive fuel strategy helped the team to the top step of the podium.

McLaughlin pitted from fourth on lap 59 and was able to undercut the lead group to emerge in front of the Red Bull Holden of Jamie Whincup and Paul Dumbrell for the final stint of the race.

“Alex basically saved the day, he came through like a champ,” said McLaughlin.

“I jumped in the car in P5, jumped Winterbottom in the pit stops, we were P4 I think at the time.

“Then we were able to sort of just knuckle down, had really good pace, the car was completely different, was actually better than it was on Friday when it was its best.

“I was very surprised to pop out in front of Jamie, I thought he probably would have had us, when we popped out in front it was like ‘we are on’, it was pretty cool.”

McLaughlin admitted he was shocked to pull off a victory after a lack of car pace in qualifying.

“It was zero to hero in some ways,” he told Speedcfae.com.

“To be honest the guy that set it up was Alex; he produced a fantastic drive and all credit goes to him and (engineer) Ludo (Lacroix) for giving us a rocket car.

“We were scratching our heads a lot after qualifying and to get what we did was fantastic.

“I was pretty worried there was no positives that came out of that qualifying session.

“We had a big swing at it and we risked a lot with the strategy. It was practically a perfect race for us.”

“I never thought we could win the race before the start of the race, but it is a great feeling,” Premat told Speedcafe.com.

“Finishing the Enduro Cup like this, it is great, especially after the previous day and what happened at Bathurst with the DNF.

“Next year is a new year and we are going to fight for the Pirtek Enduro Cup again.”

Lying third in the standings, McLaughlin is now 27 points adrift of championship leader Whincup with two rounds of the championship remaining.