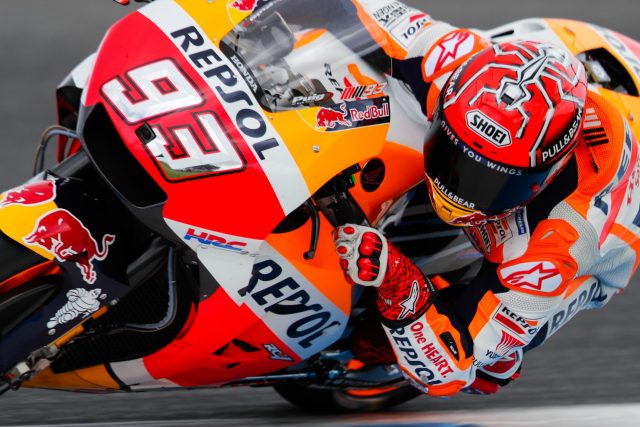 Marc Marquez has won a thrilling Australian MotoGP at Phillip Island after an action-packed lead battle dominated the race.

The Honda rider held his nerve in the early stages, keeping himself towards the front of the race in an eight-rider leading pack before sprinting clear with six laps remaining.

With his chasers busy fighting among themselves, Marquez extended his lead at the front of the race to break the tow with four laps remaining, going on to win by more than 1.5s.

A lightning start from Jack Miller saw the Australian move into the lead at the Southern Loop on the opening lap, holding a small advantage until being mugged by both Maverick Vinales and Valentino Rossi after four laps.

Miller valiantly held on for the first two-thirds of the race until his rear tyre gave up and could do little more than hold on to the coat tails of those ahead.

An early mistake from Andrea Dovizioso saw the Ducati rider drop to 20th at the start of lap two, and while he had the pace of the leaders throughout the race the early damage proved too much.

The Italian spent much of the race battling with Dani Pedrosa for 11th place, before trailing home a lowly 13th after dropping two places within sight of the flag, and important championship points to Marquez.

The Spaniard only hit the front of the race with seven laps to run, prompting Rossi to immediately put a move on Vinales for second as he tried to stay in touch with the championship leader.

Vinales lost another spot when Zarco rode around the outside of the Yamaha at the first corner on the following lap, dropping Vinales to seventh and allowing the front four to inch their way clear of fifth-placed Miller.

Rossi clung on for second while Vinales won the drag race to the line for third over Zarco with Crutchlow fifth.

Jack Miller hung on to seventh behind Iannone while Australian substitute Broc Parkes took the flag in 22nd.

His sixth win of the year, victory moves Marquez 33-points clear of Dovizioso with two rounds remaining, and could wrap up the title next weekend at the Malaysian MotoGP at Sepang.

Championship points: After Round 16