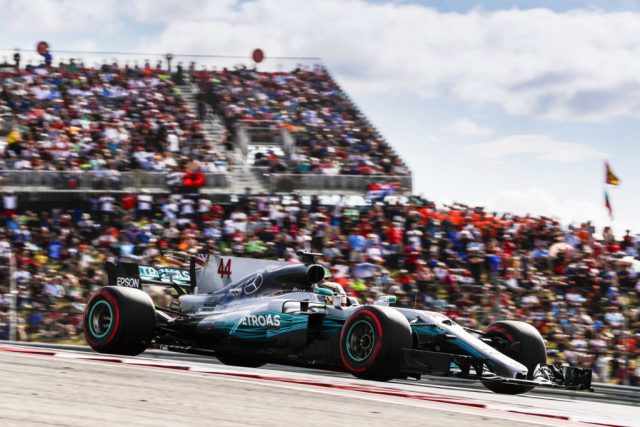 Lewis Hamilton beat Sebastian Vettel to pole position for this weekend’s United States Formula 1 Grand Prix at the Circuit of the Americas.

Hamilton claimed his eleventh pole of the year, comfortably beating title rival Vettel by two tenths, the Mercedes driver setting his 1:33.108s best early in Qualifying 3 and unable to beat his own time with his final effort.

Vettel split a provisional Mercedes front-row lockout with his final lap to move up a spot into second on the grid to bump Valtteri Bottas to third.

Daniel Ricciardo got the better of his Red Bull team-mate Max Verstappen to start fourth with the Dutchman sixth, Kimi Raikkonen between the two Red Bulls for Ferrari.

Verstappen will pick up a penalty following an engine change and will start further down the grid as a result.

Also in the top ten was Carlos Sainz on his Renault debut, getting the better of Nico Hulkenberg who elected to sit out Qualifying 2 as he was eliminated from the session.

Felipe Massa was unlucky to miss out on a Qualifying 3 berth in the leading Williams, while Daniil Kvyat, Stoffel Vandoorne and Romain Grosjean also missed the cut.

A host of post-qualifying penalties will change the order, as could investigations into blocking for Magnussen and Stroll.