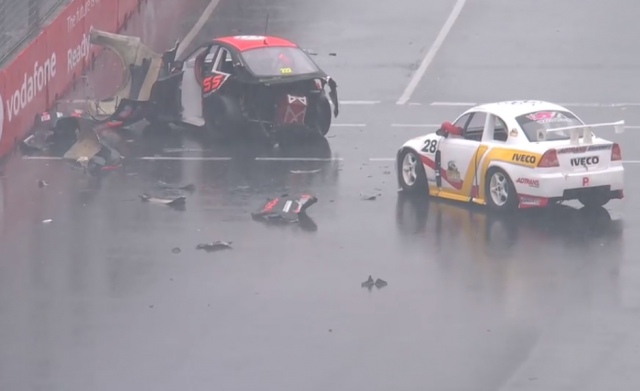 The aftermath of the crash pic: Fox Sports

Scott O’Keefe is recovering from liver and kidney injuries after a major incident during Aussie Racing Cars Race 2 at the Vodafone Gold Coast 600.

O’Keefe spent Saturday night in Gold Coast University Hospital after the crash, in which he was driven into by Matthew McKittrick while sitting broadside on the main straight.

He had lost control on an oil slick in heavy rain and was first clipped by Madison Dunston, before McKittrick slammed into the rear corner of car #222.

While O’Keefe stood up outside his car after the incident, he was taken away by ambulance after being examined by the medical team at the circuit.

“He’s sore down his right side and his arm’s swollen, his ribs are swollen.

“The doctors said that he’s got a bruised liver and laceration of the kidneys, which means he is peeing blood.

“That has subsided a little bit and they reckon he should be out by the end of today, but everything’s alright, he’s in good spirits, he was good to see us all last night.”

Casuccio expects that the car will be repaired in time for the final round of the season in Newcastle in five weeks’ time, and says that doctors indicated that O’Keefe’s own recovery time would be “a couple of weeks.”

McKittrick escaped with soreness but the Griffith Corporation car he was driving is a write-off.